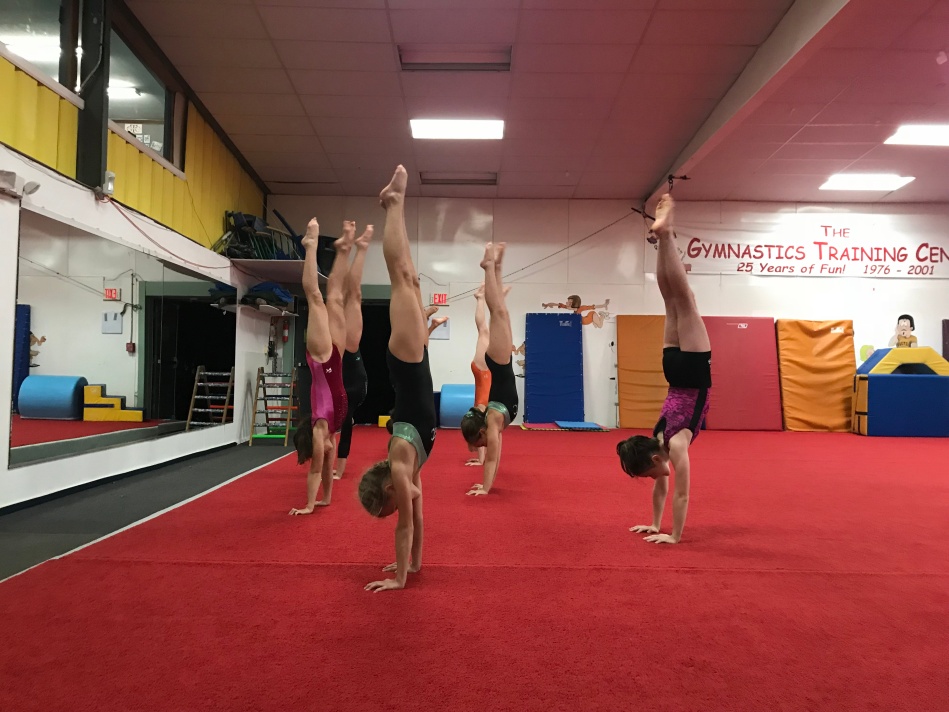 The clock on the wall of Gymnastics Training Center (GTC) reads five, and the young gymnasts swarm around the coaches waiting for warm-up announcements. At the sound of Coach Ross’ voice, the girls jump up and run for the spring floor to begin their forty-five-minute warm-up routine. Weekday practice goes until 8:30—every night, non-stop.

With leotards, bare feet, and spandex shorts, the group of girls train at a frenetic pace five days a week. Lilly, a ten-year-old level-four gets home from school around 3:30 in the afternoon, and has only an hour before she is told to get ready for practice. In this pre-practice hour, Lilly must complete all of her homework or else there is no gymnastics for her that night. She also must eat, and rest her body for practice. Lilly’s dream is to go to the Olympics.

Everyone watches gymnastics when the Summer Olympics roll around. Armchair judges grimace when the Russian judge docks a tenth of a point for a shaky landing. Americans cheer as their tween compatriots flip, jump, leap, and turn across their television screens, but few know what it truly takes to be an Olympic gymnast like 2016 champion Simone Biles.  Not even the hard-working Lily understands all the sacrifices that are soon to come.

At the 2016 Olympic Games the average age of the female gymnasts was nineteen years old; the youngest was only sixteen. Meanwhile, the average age for the 2016 male gymnasts at the 2016 Olympic Games was twenty-six. Female competitors peak between sixteen and twenty year old. If you are not at the Olympic level by the time you are sixteen or seventeen, chances are you will not make it as an Olympian. However, college gymnastics is not out of the question, and most gymnasts who do not want to end their career after high school continue in college.

As I walk around the Simsbury, Connecticut based GTC, the young gymnasts are preparing for their December season. As their coach, I am watching the girls who are running full force into a stationary event (vault), flipping on a four-inch-wide piece of wood (balance-beam), defying gravity by throwing their body into the air and performing multiple flips (floor), and swinging from their hands around a bar (uneven-bars). Each event is occupied, and each event must be mastered to succeed at any level.

Ten-year-old Caitlyn walks across the beam, hitting every pose; she is performing a pressure routine for all her level-four teammates to judge. Pressure routines are when one gymnast performs their routine while their teammates watch intently—all the pressure on them. This mentally prepares the gymnast’s mind for a competition. In a competition, their teammates are not the only ones watching though. There are parents, other competing gyms and their gymnasts, and the fifty-some competing gymnasts’ family and friends—not to mention the eight judges who will critique every flexed toe, bent knee, wobble, and fall.

The intensity increases the higher the level the gymnasts compete. Think of the levels in karate: a novice starts with a white belt, and every belt color brings a different challenge and intensity, as they aim for their black belt. At GTC, fourteen-year-old level-nine Ariel is training for the possibility of making it to Eastern’s, which is a competition for level-nine gymnasts to compete against the entire Eastern United States.

Ariel grips the bar and swiftly swings from the bottom to the top bar, like a monkey holding on with just her hands. Ariel works day in and day out to impress any possible university scouts at her competitions, as her dream is to compete in college gymnastics.

In gymnastics, success is not guaranteed. Head coach, owner and former competitive gymnast, Abigail Ross who is dressed in technicolored capri yoga pants, and a black GTC sweatshirt, says that the two most important things to be successful in gymnastics are commitment and hard work. Standing at the edge of the spring floor near the vault runway, she places her hands on her hips. “With a sport like gymnastics you need to be properly conditioned to do the skills required for each level. If you aren’t committed to coming to practice then you can quickly lose the strength or flexibility you need to avoid injury. At the same time, if you are coming to practice but not putting in the correct amount of effort then you can also fall behind.”

At GTC, the coaches expect their gymnasts to work hard. They train their gymnasts not only in the sport but also in life. They teach the girls that working hard will allow them to reach their goals. For instance, if the gymnast is given the assignment to perform five beam routines in a row without falling, they must stay on that event until they are finished, even if the rest of the group has moved on. This type of discipline teaches the gymnast that they must stick to something until they have finished. The girls develop a strong work ethic which can help in other aspects in life.

However, a coach can only do so much. Eventually the gymnast must realize that success comes from them—and is determined by how hard they work, and how committed they are. “Natural talent can only take you so far,” Ross adds. For instance, a gymnast who has had talent since a young age (girls start as young as eighteen months at GTC) usually doesn’t have to work as hard. However, as time goes on and they continue to progress in the sport, there will come a time when their poor work ethic in practice will catch up to them, and they won’t be able to perform the more advanced skills. This wake-up call can either make or break a naturally-talented gymnast. I have seen girls recommit themselves to the gym, and others quit the sport because of this.

Total commitment can sometimes be a challenge for tween-aged gymnasts. Due to the number of hours a gymnast is in the gym each week, and the competitions lasting five hours every weekend, girls miss out on the normal teen experience. A gymnast does not live a normal “kid” life. They eat, breathe, sleep, and live gymnastics, and they love it. Or they burn out.

On top of all the mental strain, gymnastics is a very body-demanding sport. I was a gymnast for twelve years. I began when I was five, and retired at the age of sixteen. After working out for twenty hours a week, for five years straight my body began to tell me it needed to stop. With back pain, and sciatica at the age of sixteen, I could no longer continue the sport, and I had to give up my dream of competing in college gymnastics. In my career I won state titles, and placed fourth in my regional meet, so I was planning for more wins my next season. Unfortunately, I did not compete my next season due to the amount of pain in my back. I was devastated.

This is the story for many young gymnasts. This sport pushes your body, and after a while your body can no longer keep up—which results in a very short career. Some other injuries include broken or sprained wrists, broken noses, toes, and fingers. I’ve suffered from most of them. There can also be very dangerous injuries including head or neck traumas, paralysis (depending on if a gymnast lands wrong on their neck), and blown out knees. Most girls are done with gymnastics by the time they graduate high school, if not before.

The girls pass me on the spring floor and I yell out to level-four Kaelin to point her toes, and straighten her legs. She responds with a head nod and asks me, “Is this better?” as she demonstrates exactly what I was looking for. At just eight-years-old, and an entire career ahead of her, we will see whether Kaelin will realize her Olympic dream. She will most likely reach her peak between thirteen and sixteen, and the level she achieves at her peak will determine whether her gymnastics career will continue onto national television.

The 2022 summer Olympics will be held in Tokyo, and the new set of hopeful Olympic gymnasts are preparing to realize their dream. I haven’t purchased my airline ticket yet, but I may have to so I can see America dominate in this physical and graceful sport once again.

0 comments on “Competing for the Perfect 10 | Megan Tolly”