A silver sedan pulls up in front of Stella and Mazie’s and two women hoist supplies from their car into the front entry way of the brick building. With the flip of a switch, lights flicker then shine on the African artwork hanging inside of the Hartford restaurant that devotes its cuisine to West African culture. Chefs DeLinda Jagne and Edna Carrington opened the restaurant in April 2016 and have drawn rave reviews from visitors across Connecticut. So far, they have been featured locally in the Hartford Courant, PBS, and a blog called Brown Skin Women. With people visiting the restaurant from states as far as Alabama and being involved actively in their community, the small business is already thinking about expanding.

Shades still cover the storefront windows as prep begins for the day. Kanye West’s “Flashing Lights” blares from a small silver speaker in the corner. The restaurant smells like an abundance of spices grandma uses to prep Sunday dinner. As Edna peels shrimp, DeLinda greets me with vegan bread pudding and a warm cup of tea with a lemon wedge on the side for breakfast. It already feels like home.

The menu is posted on their web page two hours before opening, so calls come pouring in as early as nine o’clock a.m. The restaurant opens at eleven. DeLinda’s mother joins them, helping to set the tables and change the daily menu. “We change the menu daily because it provides for creativity and freshness. As a chef, being creative and being able to express that in a small environment helps,” DeLinda explains while cleaning chicken. There is a daily option of beef, chicken, and a vegan dish. On Fridays, she incorporates seafood.

The quaint location on Capital Avenue in Hartford makes for the perfect location to open a business. The Developmental Service Department building is across the street, new apartments are being constructed on the nearby corner. There is a Dunkin Donuts is within walking distance and Hartford Hospital is within a two mile radius. DeLinda always saw this location as a “gift from God.”

DeLinda used to work across the street for the state of Connecticut as the board administrator for the Pharmacy Commission, administering licenses for pharmacists. During that time, the restaurant was a deli. “I would always say when I retire from state government, I’m gonna open a restaurant.” After work, she would see commercials for culinary school and took it as a sign. Even though she didn’t retire, she left the steady state job to pursue her dream by enrolling in culinary school.

Lincoln Culinary Institute required her to do an internship. The school placed her at this location because the original owner needed help. The owner turned the deli into her restaurant and she wasn’t making any money—she needed to turn a profit. “I restructured the entire space to allow for more customer interaction,” DeLinda explained as she used her hands to show where things once were. After a while, the previous owner had to close and the owner of the building gave them a call. The owner liked what the women were beginning to do with the space and knew their dreams of owning their own. “School taught me things like how to start slow, how to keep food costs low and spend, and how to calculate pricing. These things helped us to stay in business for the past two years.”

The clock hits eleven as the shades are drawn and the sun illuminates off of the vases in the center of the black tables. The first customer comes straight off of a plane from Bradley International to eat his first meal of the day. He arrives from a photo conference in Charleston. He’s a professional photographer and grew with DeLinda in Hartford. His business card is advertised on the table amongst the dozens of other black owned businesses. “I like to support local businesses, especially they’re ran by my own people.” While waiting for his food to arrive, I couldn’t help but to ask what made this is first stop after passing by several other potential places. “I was hungry and the food is good. You know, I never ate black-eyed peas until I had hers. Changed my life!” DeLinda’s mother serves the gentleman a comforting-size portion of shrimp and grits with a side of battered mushrooms and a homemade honey mustard sauce for dipping. “You can taste the love.” 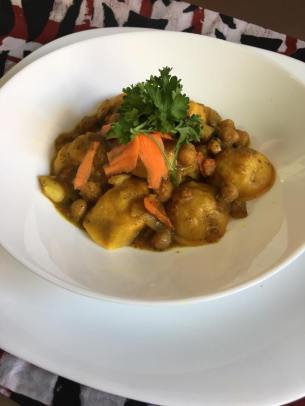 DeLinda fuses West African cuisine with Afro-Caribbean culture, producing similar meals, but tasting different. Different regions of Africa use different spices and techniques in the kitchen. DeLinda’s cooking is influenced from her time spent living in Africa. “I lived there from 2000-2002. I visited Senegal first and then lived in Gambia. Then I met my husband in Gambia and we’ve been married since 2001.” Senegal is bordered by four countries and Gambia is surrounded by Senegal except for its coastline. DeLinda also purchases the majority of her food from regional markets to support local businesses. “Purchasing food locally helps out our economy. When we spend money, it gets put back into the community. We like to help everyone.”

DeLinda gives back to the community often. She participates in events in Hartford and surrounding towns, making donations of prepared food. She’s been known to provide a good meal to those down on their luck. “It happens a lot. I was homeless thirty years ago so I know what it feels like. I didn’t like not being able to cook so I always said if I was ever in a position to give back, I would.” For the customers that are unfamiliar with African cuisine, she provides them with a sample before they order an entire meal.

Two customers walk in and examine the daily menu, trying to decide on what to eat. The man orders the same as the previous gentleman from the plane, but the woman orders the chicken and waffles. As they sit down and wait for their food, they discuss the atmosphere. “I like how comfortable this place feels,” the male says while his eyes wander around the walls of the restaurant. “Yeah, we smelled the food from outside. I wonder if it’ll taste the same as other places,” the woman replies. DeLinda’s mother presents them with their food and the woman was in shock. “Wow that looks good! That’s a big piece of chicken.” The lunch crowd grew as the couple emptied their plates. “Wow, that was the best chicken and waffles I’ve ever had!” They explain to DeLinda that they were in the neighborhood and looking for a new food place to eat. They found the place on Google maps and were happy that they did; they were going to be returning more often.

More people spill into the restaurant as the day goes on, greeting the chefs as the lunch hour winds down. The customers refer to them by first name and chat up the chefs as they wait. The ones that sit inside of the restaurant to eat make comments such as “Ya’ll put a smile on my face!” or “This surpasses that!” The empty plates go hand in hand with the compliments. It is a reflection of the main reason why the pair got into the business. “Food makes people happy,” DeLinda simply explains, plating her last order of battered mushrooms for her mother to serve. Her love for food naturally expresses itself. The small space puts the culture of West Africa on the map, contributing to the melting pot Hartford already has to offer. 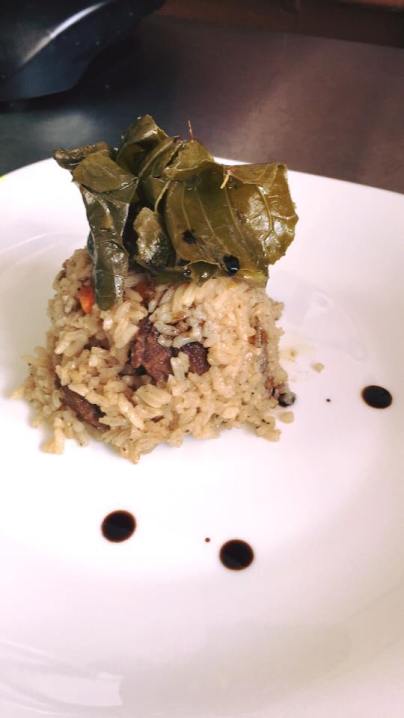