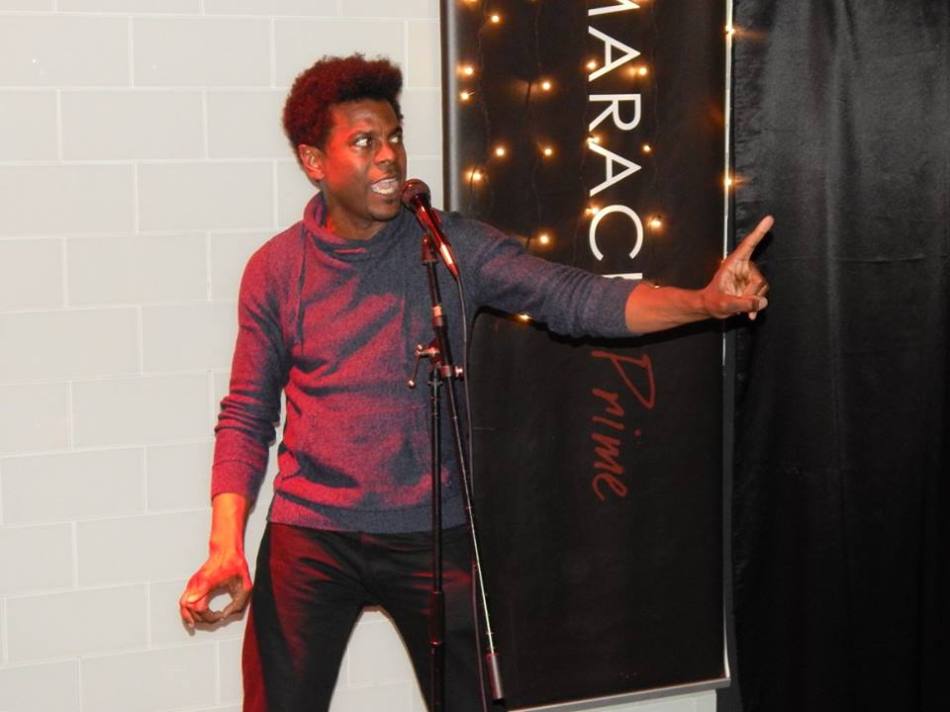 “Connectedness, community, and love that is awe inspiring in the African American community,” was the challenge for artists attending the Love Jones Café sponsored by the Ruthe Boyea Women’s Center on February 24th in honor of Black History Month. Love Jones Café is a student run open mic with a really cool name where anyone can come and showcase their rap, spoken word, dance, song and much more in the spirit of this call for art.

Located in the student center, Semesters was dimly lit, tables held pamphlets of performer’s bio’s and vendors for the night, the turning disco ball to set the mood. The stage was empty: no stool, no bottled water, and no mic stand. The thirty-some attendees in the audience— students, faculty and alumni new and old—picked over a dreadful nacho bar with salsa, cheese and watered down ice tea courtesy of Sodexo Catering.

Recent Connecticut slam poetry champion, Tarishi “Midnight” Shuler, was in the house by invitation. Wearing a dark blue hoodie, dark grey pants with black boots, he “blessed the mic” with a theatrical interpretation performance of his piece We are Bicycles, then did The Sacrifice Part 1: Revelation and ended with A love Poem Chapter 1: To The Cosmos and Back. He touched on relationships, love, and astrology, which made an impact on the audience. It’s all about the passion.

There’s an earthquake in his chest. No, a closed funeral casket. His chest is closed. He’s a buried survivor. You do not bury survivors.

His passion for his art has influenced every aspect of his life from his stage name, the pseudonym Midnight, to having the courage to stand on the stage, to how he gives back to his community. This is all driven by his passion to deliver a message of truth. As an aspiring poet, I sat down one afternoon at a table in Semesters to talk with Midnight about poetry, prison, and God.

Blue Muse: Why did you choose M.I.D.N.I.G.H.T. as your pseudonym?

Tarishi: I was born in ‘76. I’m a space geek, into astrology. I get most creative at night. Around the time when I came up with Midnight, my favorite hip hop group was called A Tribe Called Quest and their third album was called Midnight Marauders. I came in the era of poetry when people were giving themselves pseudonyms, stage names. I was walking at night and I said, “Yup I’ll call myself Midnight.” A lot of people don’t know this but it’s an acronym. Messiah Is Dominant Now Inspired God Helps Tarishi, Tarishi being my birth name. I chose it as an acronym because I’m a fan of K.R.S. One. His name is an acronym. Knowledge Reigning Supreme over nearly everyone. I took those two influences and came up with M.I.D.N.I.G.H.T.

Blue Muse: What is your inspiration?

Blue Muse: What do you stand for as an artist?

Tarishi: The purest form of art is being vulnerable, art as being subjective. There is no such thing as one artist being greater than another artist. It’s all about telling your story, telling your truth, showing out your passion whether your medium is poetry, dance, photography, film, or singing. Just being truthful to that and sharing that message with the world.

Blue Muse: What do people think they should know about you that they already don’t know?

Tarishi: I’m an introvert. I get nervous every time I perform. I put my passion first in the art. Everything I write, I mean everything I say. I tell other writers to write the things you are passionate about. I want people to know that I like to write what I like to write. I like to write the things I’m passionate about, the things from my perspective that the world should know, and telling the truth about yourself. I’m a person that will deliver the message that needs to be delivered wherever that place may be. It comes from a positive place, purity, warmth, a heartfelt place. I’m true to myself. God is the cornerstone of my life.

Blue Muse: What is slam poetry to you?

Tarishi: It’s basically the competitive side of poetry. Your poetry is judged from five random judges and you are scored from 1 to 10. The highest and the lowest score are thrown out and the three remaining scores left are added up for a possible high score of 30.

Blue Muse: Where are you going next with you poetry?

Tarishi: To space and beyond if I had it my way. Currently I’m working on a play in Brooklyn. My poetry is helping me release my very first book soon, which isn’t your typical literary book but it’ll be a picture book that tells a story using only pictures.

Blue Muse: What’s your role in the poetry community?

Tarishi: I help the community by doing workshops with individuals who invite me to come. In the future some friends and I are planning on building a workshop together to teach other poets. I also volunteer sometimes to go into prisons. I go to Riker’s Island, MacDougall. Whenever there is an opportunity to go to a prison and anywhere I can help with the community whether it’s through poetry or just using my hands to do something.

Blue Muse: How do you mentor students?

Tarishi: I went to a workshop yesterday where I heard the students perform their poetry, I give them critiques on it. I ask them the main questions: what are you trying to say? What your poem is about? Is your message clear throughout the poem? Along with suggestions on how to make the poem better. My suggestions are to give them another perspective on how the poem can go.

After the interview, I asked what advice he’d give to a poet who had fallen off the wagon. I asked him how I can get back into writing more frequently. How do I write without a rhyme scheme and be more in tune with my lost passion? He told me writing without rhyme is easier than you think, writing for about twenty minutes a day in a journal will get you back on track. With his help, who knows, maybe I’ll be the next alumni to perform at the Love Jones Café.