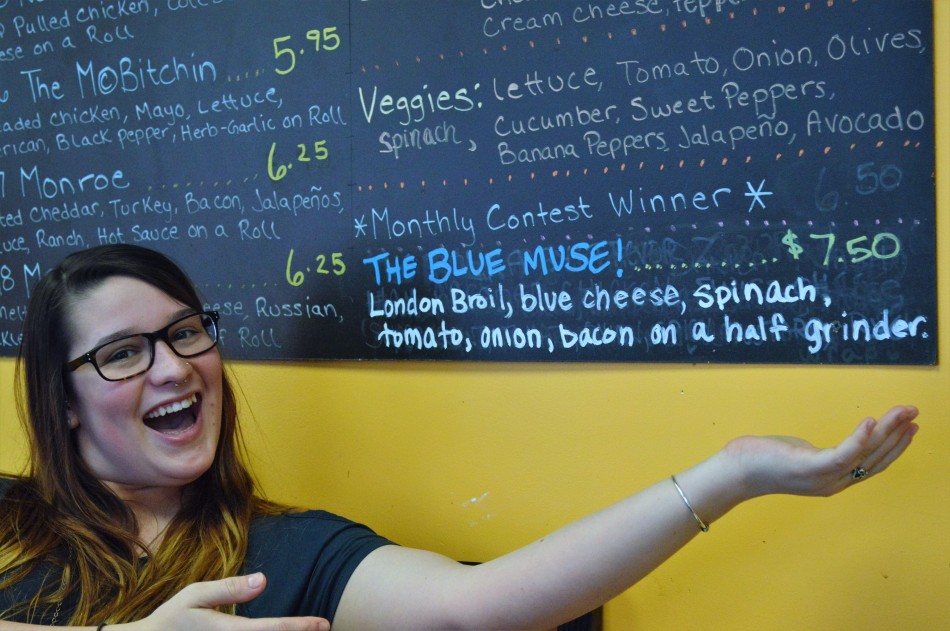 “London broil is the biggest thing right now” sandwich guru Nicole Hale says as she cracks two eggs for a morning regular stopping in for their late breakfast. “And we give big portions of meat, we aren’t stingy like Subway.”

The Underground Deli is tucked underneath a tattoo parlor and a Domino’s pizza across from Central Connecticut State University in New Britain. Over fifty sandwich recipes are available, written in neon chalk on the black walls. Sandwiches aren’t average here. The names are bizarre and the ingredients are vast. Options range from sandwiches like the No Chicken, with roast beef, ham, bacon, cheddar, barbeque, ranch, tomato, onion, and peppers grilled on a wrap, to The Dominican, dressed with roasted turkey, bacon, mayo, lettuce, tomato and avocado completed with potato salad.

Eddie Money’s “Take Me Home Tonight” sets the vibe for creative cutting and crafting. Hale says, “We listen to everything here, from 80’s cardio to Disney Days.” A Nintendo 64 connects to a flat screen in the Game Corner, with Super Mario 64 in the slot. Hale wants more than just a spot for her customers to munch—she wants them to stay and hangout.

Hale, 28, who bought the Underground two years ago, has been crafting masterpieces at The Underground ever since she was first hired at eighteen at the recommendation of her roommate.

What’s the newest recipe addition to the wall? Blue Muse, in honor of and named after the magazine. Crafted by? Me, member of Blue Muse Magazine and pioneer for the YUM column. Experience? Absolutely zero, unless you count the impressive college experience of grilling cheese quesadillas at midnight.

“I was thinking the London broil with bleu cheese. But you pick the bread. Wheat, roll, rye, wrap, or grinder?” Nicole asks, slipping on plastic gloves similar to an artist prepping with brushes and paint.

First of all, what is London broil? Is it specifically shipped from London?

Secondly, bread? Isn’t there just wheat and white? And wouldn’t just a ham and Kraft cheese slice be fine?

“Umm…Grinder. Definitely” I say, pulling the same gloves onto my sweaty, inexperienced hands.

Nicole grabs a thick, steel knife, placing it on the white cutting board counter top nicked with cuts every which way. Next to the work station plastic containers hold rich green lettuce and spinach, separated from the juicy red tomatoes, whole ripe avocados, a bright mix of peppers, and strips of onion. Next to the vegetables stand bottles of endless dressings and piles of meats. Nicole pulls a generous 4-ounces of London broil fresh from the refrigerator wrapped in paper, ready for sculpting on a toasted grinder with toasted lines pressed on the warm, baked bread. She slices the bread in half, opening the grinder up, and pushes it to me.

London broil: beef, marinated and broiled for hours, cut into strips ‘against the grain’ making the meat tough and chewy

“Does this go first?” I ask, overwhelmed by all the sandwich possibilities, looking at the bare bread. “Yep, just put it on one side and we’ll grab some spinach.” London broil nearly swallows the golden grinder. Its strips are thick, beefy brown with a tinge of pink. “I just grab a handful?” “Yep, one handful, we don’t measure exact.” A handful of leafy, crisp spinach lays a top a thick layer of bleu cheese, to carry on the Blue Muse theme. The dressing is spread creamy and satisfyingly chunky.

“I try to mix up the bleu cheese just a bit so it’s not too chunky.” The sandwich already looks so thick, overflowing with food. What else can we possibly add?

“Next, fresh avocado!” Nicole beams. She slices half a smooth, perfectly ripe avocado.

“We always use real avocados, nothing from a plastic bag” she says, laying the slices on top of the spinach.

The project is topped with sprinkles of onions to give it a final crunch to complete the first ever Blue Muse sandwich.

“Give it a try!” Nicole says, equally proud of me as she is for this new creation.

The suspense of the first bite is heavy; what if this is the most disgusting thing ever to be constructed on a deli counter? What if it’s less-than tasty to every other uniquely-savory Underground sandwich? And this bleu cheese…I actually really don’t like bleu cheese.

Until that first bite.

A mass of London broil bulges to my cheeks, coated in the bleu cheese with a crunch from the leaves and onions, followed with the smoothness of avocado on my tongue. The bread crumbs fall onto my shirt but there is no shame. Just desire to take a second, and third bite.

“I just want everyone fed and happy” Nicole grins. “I probably know about 100 customers personal orders. Customer’s come and just want to hang out and talk.”

There is more than just sandwich making happening here. Nicole is a local, CCSU graduate, truly passionate about customers and the food they put in their mouths. They provide real food with real kindness, and open their deli like a home for the community.

“If you could tell anything to the community what would it be?” I ask, still savoring my last bites of the first Blue Muse sandwich.

“We are a small Mom n’ Pop and we want to make people happy with good food so they come back.”

0 comments on “The Art of a Sandwich | Rachel Fish”