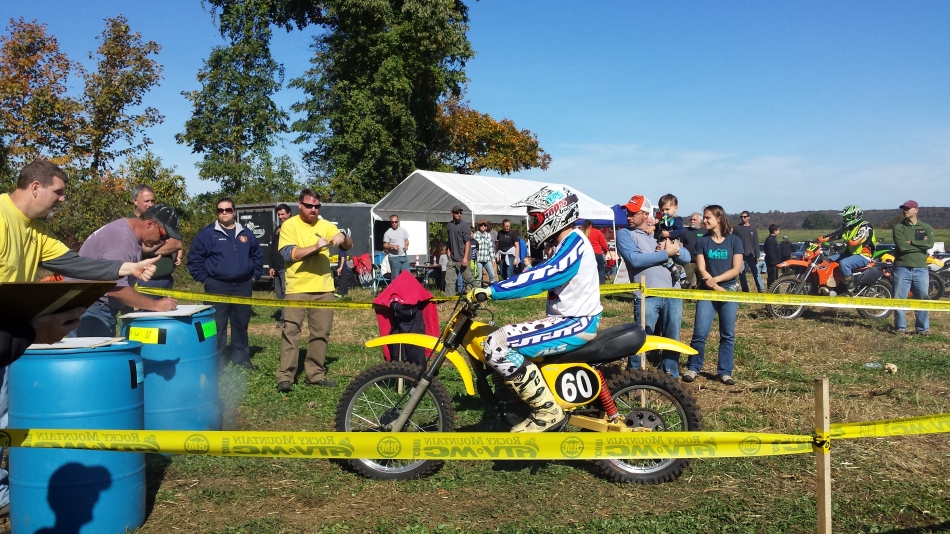 A slight October breeze carries the excitement of Saturday race day. At seven o’clock members of Salmon River County Riders (SRCR) huddle in their Carhartts in a mowed down cornfield at Blue Slope farm. They chat and catch up as the sun finishes its task of burning the early morning fog.

Founding SRCR members Kurt and Jan McCann, a retired couple from Vermont, pull their truck in front of the already set up tents. The couple owned Midtown Kawasaki, a store selling dirt bikes, snowmobiles, and street bikes. Club treasurer Jan begins setting up registration on two plastic folding tables under a white tent. Helping Jan are SRCR members and members from the New England Trail Rider Association (NETRA). They organize different sheets that allow them to keep track of riders and the different classes they are competing in. Per NETRA regulations, each rider attaches a number on the back of their helmet, right side of their helmet, and the front of their bike. NETRA formed in the early seventies to promote responsible off-road trail riding in the New England area. Today there are over three thousand members.

There are three classes in vintage racing. Vintage includes any motorcycle manufactured prior to 1978. Evolution includes bikes manufactured between 1977 and 1992 that do not have a disk brake. While the retro class encompasses bikes twenty-five years old or older.

NETRA volunteers finish setting up the food tent. A sheet with prices is taped to the colorful Halloween tablecloth, while another table holds a crockpot full of chili and other food that will be sold later in the day. The volunteers give away hot coffee and hot chocolate overfilled with tiny marshmallows to SRCR members. In two hours the races will start with the Pee Wee Scramble and end with the vintage race.

I got my first dirt bike a few months after turning eighteen. I had more ambition than skill, and being a slight five foot four created a challenge. My dad used my hard earned money to buy a KTM 200. The thrill of buying a bike overshadowed the bike’s major shortcoming; it was too tall for me. I figured the problem would sort itself out. You don’t necessarily need to be able to touch the ground to ride. At least, that’s what my dad told me. Wrong. My brother and I had fooled around a few times on my mom’s Kawasaki 100, but it was not a good bike to learn on due to the small power band.

KTMs, manufactured in Austria, have a wide power band, allowing the bike the ability to go steady instead of either going full power or stopped like my mom’s Japanese manufactured Kawasaki. Being a 200 meant the KTM’s engine had 200cc of power. Not the largest engine size you can find on a bike, but still powerful. Too powerful for me. The smallest sized scooter is a 50cc. It can go about thirty-five miles an hour max. Most likely, this KTM 200 could hit sixty miles an hour on a dirt road.

A month after buying the KTM my dad bought a TTR 125. A much smaller bike than the KTM 200. Almost a toy to him and my brother. The TTR was the perfect height for me. It’s a Japanese manufactured Yamaha that can withstand a beating. One that my brother made sure to give it before quickly moving on to my dad’s “new” KTM.

Members of SRCR ready the final touches for the nine o’clock race. Rich Wilson, the official trail boss for the event, sends a few riders out to sweep the course. Grant Swanson, New SRCR member, goes out wide-eyed and smiling. The job of sweep riders is to make sure the trail is marked, and clear of any branches that may have fallen the night before.

Members Kurt McCann and Paul Hotkowski pull out bikes for display. The day is part race, and part bike show. A 2013 Honda and one vintage bike receive for-sale signs, while another vintage bike is wheeled out for display. Checking out the vintage bikes, members of the club reminisce about the different bikes they had grown up riding and learning on. Kevin Wall told a story about his brother hiding his bike at a friend’s house because their father disapproved of dirt bikes. 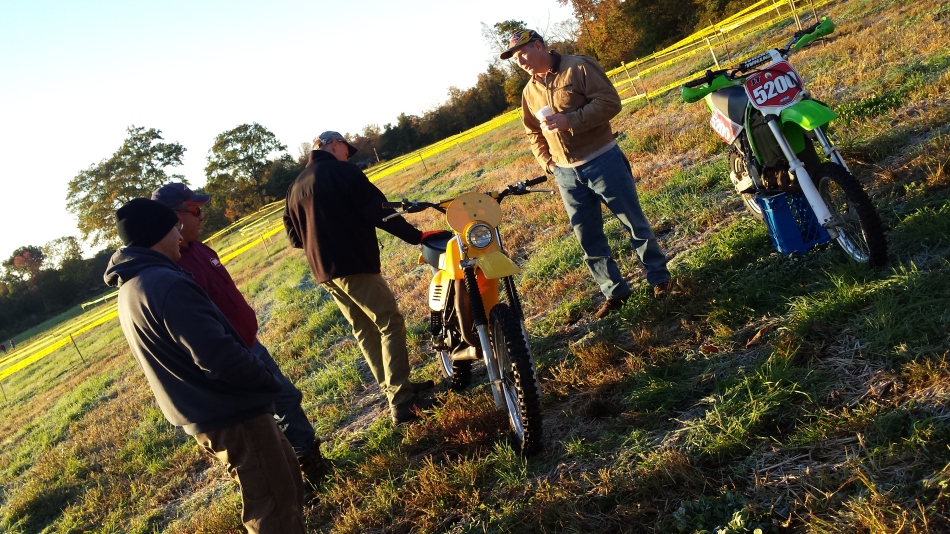 I started seriously attending SRCR meetings again when I was a sophomore in college. My dad had brought my brother and I to meetings when we were younger, so many of the members remembered me. Work parties allowed for many opportunities to get involved. The relaxed attitude of the club meant that days we worked at the tracks we tended to ride afterwards. These rides allowed me to get practice that I otherwise wouldn’t have had. Starting in the field sections, I would go around in circles over and over again, never getting bored while my dad checked out the trails with other club members. As my confidence on my bike grew I began following my dad into the woods sections. We would do a small part of the trail so I could get different kinds of riding experience.

As the second Pee Wee Scramble comes to an end the vintage class riders get their bikes ready, moving close to the start line. The vintage, evolution, and retro classes, separated only by a small space between each group, fills the area behind the start line. As they wait for the start flag the riders rev their bikes. Fans stand near the start line with their children.

“The [Vintage] Series actually started in 2014 with Nate [Hubbard] and Dan Gavin spearheading the effort to have a bunch [of] fun vintage rides at various Pee Wee Scrambles, Junior Enduros and even a Hare Scramble or two,” wrote Thomas Accomazzo via e-mail, a member of SRCR that helped to get the Vintage Series started. Due to their effort, “a subcommittee was formed and rules drafted for the 2015 NETRA’s annual rules and sanctioning meeting.” From there a community within a community formed. While still somewhat new, the vintage races have definitely sparked the formation of a new and interesting group within the NETRA community.

As an SRCR member approaches the start line, holding the start flag, the riders drop all antics. They straighten on their bikes; smiles gone as they focus. The flag is dropped and the first class races into the woods, throwing dirt up in their wake. One minute goes by and the flag is once again dropped for the second class. As they race after the first riders, fans shout encouragement. Another minute passes and the third class goes racing off after the others. As the spectators listen to the sounds of the bikes ripping around corners and flying through the woods they wait for the lead rider to emerge on the far edge of the field.

“We all had a common bond that we enjoyed working on the older bikes and more importantly wanted to ride them,” wrote Accomazzo. The relaxed pace of the vintage races shows through due to the fact that, “60 percent of the riders that come to an event are there just to ride their old bikes and see the other bikes that people bring. It’s about hanging out with people that are there to enjoy something they just bought or built over the winter months.”

Sectioned off by yellow caution tape, the field section looks pretty tight. Not the best place to pass someone, but it does happen. This is because when a rider realizes someone has come up behind them they usually try to move out of the way if possible to let the other rider go by. During the vintage race two riders enter the field section close to each other. The first rider moves to the side, slowing down slightly to allow the rider behind him to pass. Yet, when the first rider moves over to give the second rider a chance to pass him the second rider does not take it. The two go through the field section side by side, creating a perfect camera moment for spectators. The riders do not pull away from each other until forced to in order to go through the barrels, where members putting on the event take down their number in order to keep track of how many laps each rider completes. They motor through the barrels, spraying dirt up as they shoot away from the spectators for the next lap.

After one hour of racing the lead rider dashes under a white flag. The rest of the riders follow, some right on his tail while others are farther behind. Last calls of encouragement follow them as they speed towards the thick pine and oak forest for their final lap.

Win or lose stories fill the air after the race. People hangout and swap stories about sections they had hard times with, like areas where soft sand took a bike down. The riders just laugh it off. Here for the fun of the race their focus is not on the trophy they may win. While some riders are younger, others could possibly have grown up riding bikes similar to the ones they are racing today.

Riders go back to their trucks, loading their bikes and changing out of their riding gear. The tight dirt bike pants tucked into tight boots strapped across the ankle and leg are not the most comfortable thing, but they keep the rider safe in case of any crashes. Back in jeans they gather at the white tent where they trade coffee for cold sodas to accept the day’s awards, before heading home to fine tune their bikes for the next race.

3 comments on “Day at the Races: A Vintage Dirt Bike Community in New England | B. Chase Wall”