When I walked into the Stony Creek Brewery on a recent Thursday morning, I heard bass-pounding electronic music. I stepped into a mini-gift shop filled with Stony Creek apparel, as well as six packs of their beer. Multiple large steel cylindrical containers stood before me, or as they are called in the trade, kettles (which, I would later find out, stored the beer while it was fermenting). Stony Creek was founded in 2015 by Ed Crowley Sr., his wife Peggy Crowley, and their son Ed Jr. I arrived at the Branford brewery at nine a.m. to observe the beer making process with lead brewer, Gordon Whepley. Perhaps we’d even try a few.

Inside the brew room,

I watched Whepley survey the vats of freshly brewed beer. He wore goggles, a short-sleeved button-down shirt with his name stitched into it, ripped cargo pants, and steel-toe boots. The process begins when Whepley and his team fill the kettles up with sugar and grain. The kettles, which were about the size of a large bathtub, are programmed to act like a whirlpool and sift out the excess sugar. The kettles are heated to over 200 degrees and they keep the liquid in the kettles for multiple hours. While in the kettles, more or less hops will be added depending on the beer being made. Once the beer is finished, it is bottled, packaged, and put into a refrigerated area. The beer either awaits passage to liquor stores across New England, or is poured into the kegs used at the brewery.

People may not realize the science that goes into making beer. Russ Meister, Quality Control Expert, sat at his desk analyzing yeast cells underneath a microscope. He used a counter to count the amount of yeast cells that were still alive. He wore a grey beanie and a button down shirt with his name on it. He stains the yeast so he can see which cells are dead and which are alive. If the cells show up clear after having the dye added to them under a microscope, he knows the cells are alive. If the cells come out pink, he knows that they are dead. “The cells divide, they reproduce by budding, the original mother cell becomes two individual cells and they become more.” When asked what happens when a “good” cell reproduces, Russ said, “Generally if you have a healthy cell to start, you’ll have a healthy cell to end.”

Gordon and I walked to the bar area of Stony Creek. I sat down on one of the barstools and looked out at the gorgeous scenery that is Long Island Sound. He grabbed a glass and poured me a Stony Joe (which Whepley created.) The Stony Joe is a mocha stout; it tastes like coffee with a bitter aftertaste. There is an imperial version of Stony Joe that has a higher alcohol by volume percentage 8.2% ABV, as opposed to the original Stony Joe’s 5.5%. I sampled the Black Water Pilsner, a darker colored lager that has a lighter feel and less of a bitter aftertaste. “People have this perception of [Black Water Pilsner] but it’s a totally different feel than people think,” said Whepley. The final and favorite beer I sampled was La Garza, a MexiCali style beer, which means that it has hints of lemon and lime. This makes for a lighter, fruitier tasting lager (lagers are beers that are conditioned to be in colder temperatures after fermenting). They do not have much of a hoppy, bitter aftertaste.

The most popular brew at Stony Creek is the Cranky which has a citrus and tropical feel with hints of black pepper and pine. They have three variations: Cranky, Big Cranky and Little Cranky. Big has a higher volume of hops while Little has less hops. They have other types of beer as well for anyone who likes a lighter beer with less hops. One of those beers is Dock Time, a lighter option with added flavor and spice.

Branford has become a 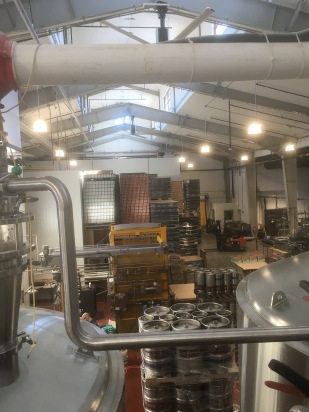 hotbed for microbreweries. Three breweries are currently open for business: Stony Creek, Duvig and Thimble Islands Brewery. I asked Whepley about the competition between the breweries. “We’re all completely different types of breweries, they’re very different experiences, very different beers, it’s like a rising tide, what’s good for us is generally good for them.”

I left Stony Creek Brewery at around 1 o’clock, two hours before it opened to the public, smelling of hops and barley, my head swimming in Ph levels and the correct water to sugar ratio for a smooth tasting IPA. The brewery’s regulars probably won’t worry over such details. I now have a better understanding of the beer making process and am better off because of it.