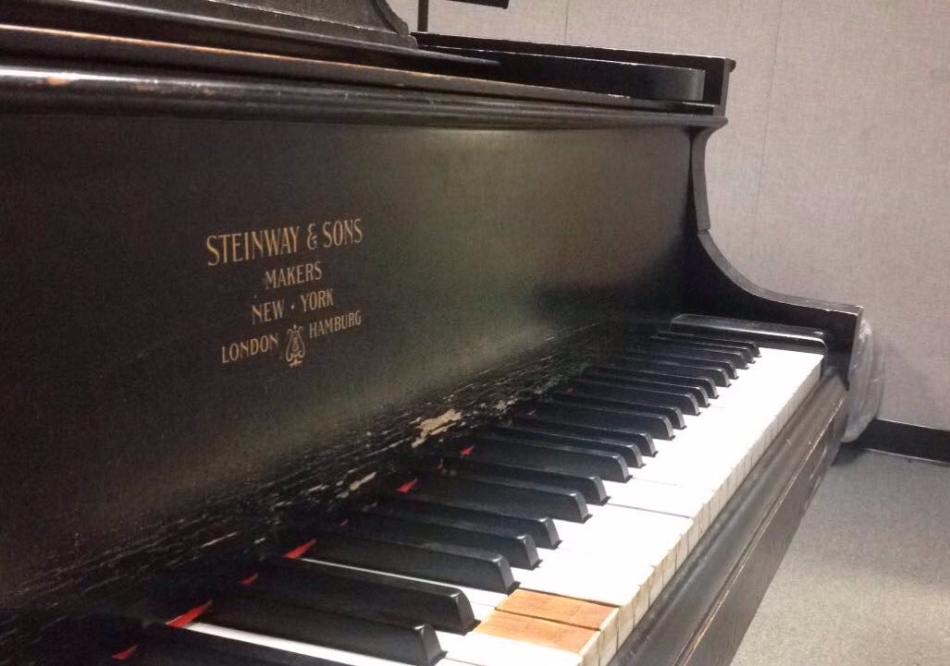 Echoes of classical compositions, vocal warm-up scales, and pizzicato violin plucks filled the cramped hallway of the CCSU music center. Every practice room had been fully booked in Welte Hall. The sign-up sheets were packed with student’s names and their corresponding practice slots. I claimed the sixth practice room at 4:30 to freshen up on my piano skills. Dimly lit, but quite relaxing, the room squeezed in an aged, 88-key grand piano in an the area of no more than forty-eight square feet. Each piano key looked weak, the original finish chipped, but maintained purpose among its ensemble. Across the room stood an all electronic Yamaha piano, barely beaten. Glistening dark black, it stared down its roommate, awaiting the next musician to pick their poison.

The acoustic piano sports character and authenticity, but its sound is dull due to the lack of upkeep. Pianos need to be tuned right, need to sound bright and never dull and buzzy, each hammer must drop and retract smoothly, every piece must be intact and functional. The old Steinways crammed in the limited practice rooms will have to do for now, as their fates lie in the hands of educational funding.

At a state school, the money seems to travel towards a new facility, or new sports equipment. Public schools are constantly ignoring arts programs, and CCSU musicians have felt the effects.

CCSU suffers from a deficiency in arts funding while at 36.5 miles away, the arts at Yale University received a $100,000,000 gift in the form of a brand new mega-facility dedicated solely to music. Currently, Yale already offers four different facilities that host multiple practice rooms for daily use, exclusively for Yale students and faculty. The Ivy-League school is considered one of the most prestigious, so it’s understandable to see such an upgrade even though they already are largely more equipped than CCSU. Yale has numerous practice rooms instead of seven, now with the new Adam’s Center, the number increases. They plan to incorporate additional practice rooms, music studios for music tech, an orchestral hall, and a “student gathering space.” Where is the line between proper budgeting for necessary music programs in both public and private education?

The Mozart Effect made kids smarter.

“The Mozart Effect” has been widely talked about  in defense of music education, as it implies that after listening to Mozart, a person can be smarter. In 1993, when the phrase was first coined, neurobiologists Gordon Shaw, Frances Rauscher, and Katherine Ky tested the hypothesis with a special IQ test given to three groups of college level students. One group listened to a relaxation tape, one complete silence, and the other Mozart. Their data showed an increase of nine IQ points to the students that were exposed to Mozart prior to the test, while the averages from the other group showed no improvement. The Mozart Effect made kids smarter.

Along with listening to the music, even picking up the flute or saxophone has brought great benefits. Students that play a musical instrument have demonstrated larger brain function. In a Boston Children’s Hospital study, neurologist Dr. Nadine Gaab showed that the function of controlling an instrument is a strong predictor of academic achievement, and any musical training would help the child’s academic future. Learning an instrument introduces the student to self-management and discipline concepts, as well as improving their ability of processing sensory information. Music helps strengthen a child’s reasoning skills, their ability to read, concentrate, and reduce stress levels over time.

Public schools have not prioritized music education to prepare students for college. School systems value subjects like math and science, and those areas will probably remain untouched forever, leaving a public school’s music program to perform Rallentando, what musicians would consider decelerating. From 2002 to 2004, state-level spending for the arts dropped from 407 million dollars to 272 million according to the National Assembly of the Arts Agencies.

The National Association for Music Education (NAfME) is looking to improve data collection to better track the total income and national spending on music education. Generally, the biggest expense for music programs are the teachers themselves. A program is only as effective as the teachers that guide it. The teachers’ attitude towards instruction is key to motivate a student to become active and attentive learners. I  asked the NAfME’s Lynn Tuttle what age group is the most crucial to engage in music education. Tuttle said that a sequential, ongoing program throughout all school levels is the most effective, and certainly a highly beneficial asset to a student’s education. Music education combines natural communication skills, the ability to work as an ensemble, and allow for these human qualities to strengthen through an effective program, even influencing students to be more likely to be engaged in their other studies. “If they believe they can get better, they can,” Tuttle reassured, describing a student’s perseverance as the driving force in their ability to perform.

Arts funding varies from state to state. The NEA has received $5 billion in total budget since their inception in 1965. The Trump administration proposed to cut programs like the National Endowment of the Arts, if it passes, greater access to musical education would suffer for public schools’ students. Annually, the NEA gets roughly $148 million to disperse to every congressional district in the entire country. Yale’s donation resembles that of the shiny new electric piano, while public schools follow the fate of the aging Steinway at CCSU. The two are very similar in utility, but one of them lacks greatly when not given the attention needed to perform. A student’s musical experience will lack, and so will their education.