The Right Song, a techno track by Tiesto, filled Chez Est on a Saturday night in late September. Multi-color lights danced and flickered around the room. The bar was cleaned and polished, the bartender radiantly attractive and swaying from side to side to the beat of the music. Men flirted with one another, others sat at the bar sipping cocktails, others grooved on the dance floor, and in the darkest corners, still others flirted and kissed. A small stage sat to the left of the bar. Out on the patio, with no rainbow flags to make the obvious gay statement, it all seemed like a very quaint little space.

Her beautiful, neon-green hair hovered above expressive colorful makeup. At nearly six feet tall, her punk-skater dress with green unicorns, teddy bears, stars and eyeballs stopped at her toned thighs, revealing fishnet stockings. She’s a drag on fire. She speaks like a trucker, but from the heart. “Just don’t be afraid, no matter what in the end we’re all going to fucking die, we’re all gonna get hit, we’re all gonna fight. You just need to be yourself.” She flipped her hair and straightened her pose. Mia’s a total badass.

“We’re a community; we’re strong! I rather die a gay, confident drag queen than scared in a corner. And nothing is gonna stop me.” It was not until 1980 that drags were becoming more acknowledged into a mainstream cultural phenomenon.

Drag shows, or as they were called 100 years ago, “Faggots’ Balls,” have a long, closeted history. In the late 18th century into the early 19th century men dressed as feminine pantomimes; These acts were first used to make fun of women.  Today clubs like Chicago’s Baton Club are tourist attractions. Drags strut their unique characters onstage. In Connecticut, small clubs like Chez Est and the Partners Café provide stages and audiences for drag performers.

Thanks to the Mayans and their belief that the world was going to come to an end, Mia began doing drag for about four years ago on December 21, 2012. She set herself to do crazy things out of her comfort zone, to live life, and that’s where drag came along. The stage name Mia E Z’Lay has an interesting background. The name Mia comes from a 2001 Gameboy Advance video game called Golden Sun. Mia is a water mage, with the element of Mercury, hence, why she also wears a light blue wig as her signature look, depending on the show. “E” stands for Elizabeth, and if you have $20 you could just call her Mia E Z’Lay for short.

In recent years, successful drag entertainers have quit their day jobs. A dream for Mia, and many other drags, is to be chosen for RuPaul’s successful reality show Drag Race. Contestants compete to gain more publicity, money and gain a bigger name for themselves. For now, Mia travels to gigs in just a few states, and little by little gaining an audience. A Saturday night at Chez Est, Mia casually sits down for her interview, her many fans and friends approach to greet. Everyone knows Mia E Z’Lay. She holds a status like a celebrity as everyone wants her attention. “Hey Mia, what you doing?”

“Shorty let me talk to you” – “Hey can I get your numba?” – “Damn you got a fat ass ma.” When she’s about town in drag, she’s ready to shut down thirsty men trying to get some. She does have an amazing body, curvy hourglass figure, to die for toned muscular legs, cheek bones that can cut another drag in half; she’s beautiful, her style and body can be mistaken for a Kylie Jenner impersonator. But she’s all Mia. “It doesn’t matter if you get put down, you’re still a beacon for your community.” Mia speaks her mind and isn’t afraid to be heard and she will have you swallow your words. No matter what people think of drag, Mia stands up for her community.

As the conversation continued for the night, the music was loud and catchy. The bar was full, drinks were being served here and there and drags have come out to play and run the show. With a sex on the beach drink, the lights flickered in different colors. Mia prepared for her show. The crowd cheers and here we go. “Fuck it, that’s the best thing about being a drag queen or being a drag king, how you want to view something if you’re a beacon in the gay community, that’s who you are. And if it pushes you off and it sucks, and it does suck. The comments, people talking shit but it’s fun, it’s worth it, it’s worth it at the end.”

Let the show begin. Mia E Z’Lay and her Chamber of Secrets took the stage. “My goal at the end is to make people laugh, and find a man that loves me and I’ll never find the second one, but I can still make people laugh. If they’re not gonna laugh with me but they can laugh at me. Can’t make fun of yourself, how are you gonna make fun of somebody else.”

Mia is full of hope and good vibes. Laughter filled the room with the beaming lights directed on her, like the entertainer that she is. 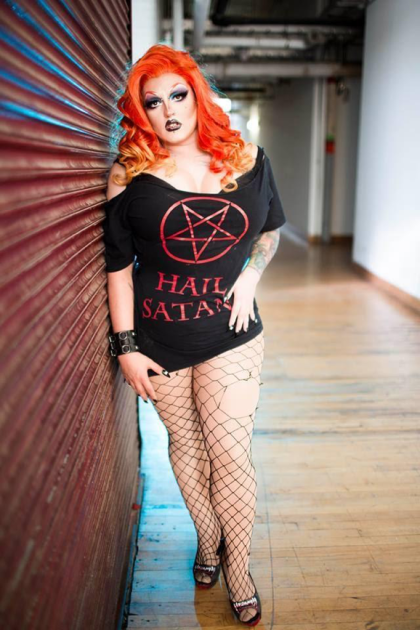 4 comments on “Sashay Away | Rocio Ramos”