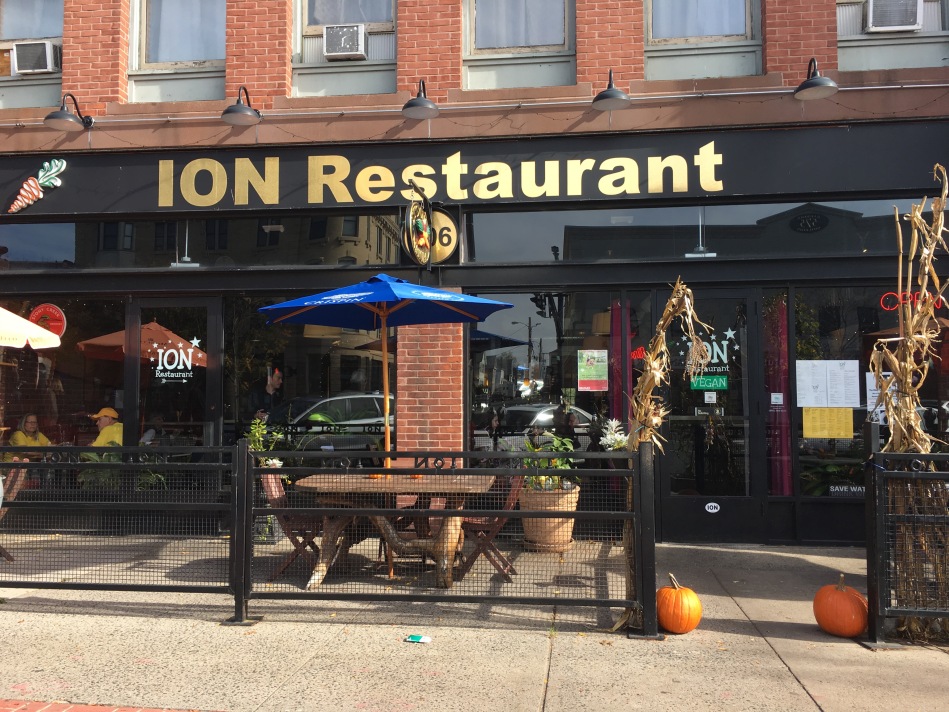 We sat in a corner booth at the far end of the large dining area. Most of the other tables were full. The buzz of talking filled the room, masking the sound of the indie music playing over the speakers. I looked over the menu carefully while the other three in my group talked amongst themselves—they already knew what they wanted. This was my first time eating at ION, a vegan restaurant in Middletown, and being the only vegetarian out of the group of veteran vegans, I wanted to make sure I got something that I’d love. Their food menu wasn’t too extensive, but I read every item closely—the enchilada, pierogi, yam quesadilla, and Reuben all sounded amazing, but I ordered a classic: the shepherd’s pie. Two of my friends ordered the southern plate, and the last friend ordered the fish and chips special.

The dining area had a mix of wooden table chairs and large, red clothed booth seats. The walls were covered with eccentric artwork which hung over the deep red paint. The table was a large and uneven piece of wood, with no discernable corners or edges. The rings were completely visible underneath the smooth glossing that protected it, as if the tree had been cut down just yesterday. As I looked around the restaurant, each party had their own unique wooden table. We all had a small part of the forest.

I anxiously waited in anticipation every time a waiter would come out of the kitchen. I was eager, but nervous to try my first vegan ‘mock’ meal.  After about twenty minutes our server pushed through the kitchen doors holding four plates. He made it across the dining room and placed the meals down in front of us and I felt myself salivating. My shepard’s pie was covered with thick and creamy mashed potatoes. I dug my fork through them and they gave way, showing something that looked like ground beef at the bottom. I filled up my fork, and took my bite. The potatoes were the perfect creamy consistency, with the flavor of the herbs pulling through to make a complex and tasty dish. The meat substitute at the bottom was surprisingly spicy, and had a texture almost identical to ground beef. (I learned months later through my own recipe browsing that this is called TVP, textured vegetable protein. It tastes like whatever you put on it. It’s amazing for chili and tacos.) My friends’ plates looked incredible as well, the fish and chips actually looked like a plate from a seafood restaurant.

The term “vegan” wasn’t technically coined until 1944, but the concept has been around since the 1800’s. Englishman and animal advocate Donald Watson formed The Vegan Society in 1944 with a few others to “discuss non-dairy vegetarian diets and lifestyles.” Over three decades later in 1979, the society became a registered charity and with that came an updated definition of veganism by the Memorandum and Articles of Association: “…a philosophy and way of living which seeks to exclude—as far as is possible and practical—all forms of exploitation of, and cruelty to, animals for food, clothing or any other purpose; and by extension, promotes the development and use of animal-free alternatives for the benefit of humans, animals and the environment.” Over seventy years after Watson sat down with his five friends to talk, veganism is still a widely practiced diet and lifestyle.

A stereotype that vegans are only doing it for the animals’ well being is not completely accurate. While that is somewhat true, there are a prodigious number of reasons why individuals chose this lifestyle choice. For instance, I know vegans who made the switch because of the environment. The meat and dairy industry are influential across the globe, but at what cost? Forty percent of our land on Earth is used as a way to feed us, and thirty percent of that is used solely for chicken, cattle, and pigs. USDA found that one dairy farm in southern Idaho produced 3,575 pounds of ammonia, 33,092 pounds of methane, and 409 pounds of nitrous oxide just per day. With 365 days in a year and some 50,000 dairy farms in the United States, those numbers are detrimental to our planet.

Many vegans switch over to the diet for health reasons as well. By eating a 100% plant-based diet, most vegans are able to get all of the vitamins and minerals they need to live completely healthy lives. Meat eaters, on the other hand, sometimes don’t get everything they need. According to Dr. Michael Greger on NutritionFacts.org, on average, “vegan diets tend to be deficient in three nutrients, whereas average omnivores tend, unfortunately, to be deficient in seven.” People who follow vegan diets usually only need to supplement a B-12 vitamin, and sometimes calcium and iodine. Omnivores usually lack in magnesium, fiber, vitamin C and vitamin E. Also, eating meat can be deadly. English and Germany studies have shown vegetarians are less likely to get breast and prostate cancer than meat eaters.

Even though omnivores and vegan seem to think very differently in regards to their diets, I think we can all agree that there’s never anything wrong with a little sweetness. If I’ve learned one thing from eating all kinds of food for the past two decades, it’s that there is always room for desert. ION had a few types of deserts on their menu, but again I went with a classic—carrot cake. I was hesitant to order it at first, just because I wasn’t sure if it would be the same. The fluffiness of the cake was something I didn’t think a fake egg could replicate, and I couldn’t understand how they would match the richness of the cream cheese frosting without any real cream cheese. I’d only be slightly exaggerating if I told you carrot cake was my favorite food on the planet, so I hoped this would be an alternative I could love just as much. A few minutes later our slices came out from the kitchen and were placed on our table. They looked like regular cakes, with the layering and frosting done perfectly. Mine even had little dollops of vegan whipped cream on the side. When I took my bite I knew something was different about this cake—the sugar content. Most normal cakes are sweeter, because of the amount of sugar in the batter and frosting, but this cake was distinct. It wasn’t made with a bunch of sugar, but with an array of different warming spices that all worked together to give the cake a much more complex taste than any other carrot cake I’ve had. And the cream cheese frosting was perfectly creamy.

Renana Magee, the manager of ION, recounts her early days as a vegan, where the options weren’t as wide spread and available. “Back then, you’d go to a restaurant and if you were vegan or vegetarian you’d get pasta with lame sauce and some dried out veggies and that would be it, that was your option.” The days of lame sauces are ending. ION is only one of the many places in Connecticut that serves good, hearty vegan dishes. There’s also 21 Oak in Manchester, Fire and Spice in Hartford, Pure Alchemy Juice Bar in Wallingford, and I can even get my famous CT style pizza from Pepe’s without any cheese.

The same way that I can go into a “normal” restaurant and find something to eat, I can hope that non-vegans will walk into these restaurants and feel comfortable, have a delicious meal, and see veganism and the food in a different light. Renana says that’s why ION’s menu is mostly traditionally non-vegan dishes that are remade to be vegan, to show non-vegan eaters that they can still have the foods they love. “We’re trying to show everyone that they don’t have to torture and kill animals,” she says, “that’s the bottom line for me.”

As we left the restaurant that night, take-out boxes in our hands, I had my first serious thought about going vegan. A few weeks later, I made the change, and I’ve been vegan ever since. Obviously, the ideal world would be one where animals were not used or harmed for the food on our plates, but I know that everyone having a vegetarian or vegan diet is not realistic in our fast food world. But one thing we can do is focus more on eating a primarily plant-based diet while supporting locally farmed food and ethical farmers who treat their animals humanely and sustainably. Journalist and food writer Michael Pollen says it best when he says, “Eat food. Not too much. Mostly plants.” Giving more people the opportunity and access to this type of diet is why the restaurant is so important to Renana. “You know I’m still paying off debt, but it’s worth it. I feel like I’m doing something good and I know we’re helping more and more people eat this way.”