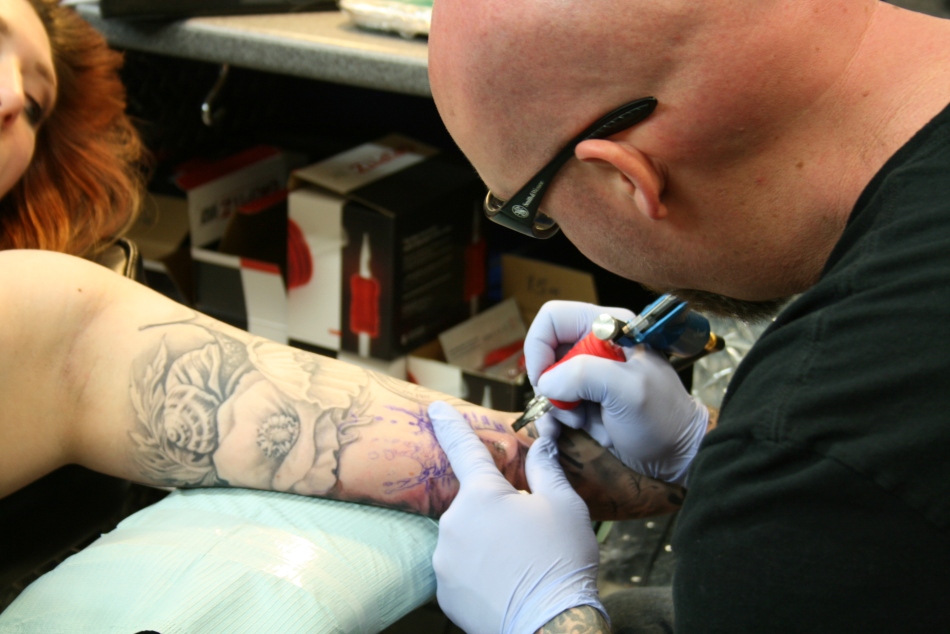 In Bristol, Connecticut, on the corner of West Washington and Andrews Street, sits a quaint tattoo shop. Upon entrance, customers are greeted by the fragrance of handmade soaps, lotions, and lip balms, the buzzing sound of tattooing needles masked by small talk and laughter, and the front desk girl’s charming voice answering every ring with “Hartford County Tattoo!” A large stoplight in the front of the room hangs next to a church pew across from a white wooden piano. The walls are littered with artwork from local artists ranging from senior center residents to stay-at-home moms.

“Our walls are open to the community,” says Chad Lockhart, the owner of Hartford County Tattoo. Lockhart walks down the hallways, stopping between each golden frame. Both of his arms are colorfully decorated with two sleeves of tattoos. He’s been a tattoo artist for twenty-three years. “Nancy the happy turtle,” he points to a painting of a grinning turtle using a yellow flower as an umbrella in the sunlight. Between the artwork are the doors to ten artist’s rooms – nine tattoo artists and one body-piercer. “Our theory is that if everyone has a room they’re comfortable with, they’ll do better work,” Lockhart continues as he walks through, opening each doorway to a unique and personal studio. While one is decorated with hot pink furniture and baby blue walls, another has a blend of Star Wars posters, a mickey mouse clock, and an array of skateboards.

Inside one of the rooms is a man with a grey beard sporting a long denim apron finishing up a thigh tattoo, who identifies himself as “exceptionally handsome Mr. Rick.” In the next room, “Red” a redheaded artist who has been with the shop since the beginning, gives a woman with curly, greying hair what looks like her one-hundredth tattoo.

Whether it’s staying after hours to tattoo regulars or giving back to the community, Lockhart’s passion for his career choice is prominent with every interaction, employee or guest. “I was only going to get one tattoo,” Lockhart says with a smile. Originally he had aspirations to be a museum art director but he quickly found that was far less rewarding than he’d anticipated. “So, we took our whole life savings and opened the shop.” His wife makes all the homemade beauty products on display out front. Even his children are getting in on the family business. His teenage son has begun to learn the art of tattooing. However, Lockhart would like to see a little more time pass before his kids begin to get tatted themselves, “I don’t want them going and getting a skull on their forehead. That can wait.” Jokes aside, Lockhart’s community philosophy goes beyond running a for-profit business. As advertised on Hartford County’s Instagram page, Lockhart has started a project called “Erase the Hate” in which he offers to cover anti-religious and racist tattoos entirely free of charge. He also works with women, tattooing nipples on reconstructed breasts after surgery, “these people start balling. It’s life-changing.”

Towards the front of the shop is an old Pac-Man game transformed into a coffee table. A lounge with a red and gold striped couch sits beside a bright blue love seat. Three artists relax in a sort of cool-guy-pow-wow. “It’s just a part of the culture,” Johnny, a thirty-ish guy with tattooed hands strokes his long black beard. “I used to play music,” he says as his eyes light up, “A lot of people had tattoos, especially those that I looked up to. I’ve always been the creative type. I started as the ‘counter girl,’ just always around drawing and tattooing.”

Similarly, the body-piercer, Alexis, gives credit to his start in the industry alongside Johnny “because of the hardcore scene. I used to tour in a metal band named Surrender,” he says with a sly grin. Alexis wears a top-knot bun with a black beard and against popular assumption, wears zero body piercings, “I had over forty in at one time. The way I was getting pierced was kind of like filling a hole. I would get pierced and I would feel amazing. Now, I don’t need it. I just feel like I’m giving back to the community.” Alexis worked at another tattoo shop but left after thirteen months. Hartford County’s been home to him ever since.

The three-man crowd entertains themselves with one word games, shouting, “what’s the first thing that comes to mind? – Blue!” In the middle of the playful shouting sits Daryl, a slender guy in jeans, a black hat and black hoodie. Another artist yells, “Okay, car! – Go!” awaiting clever responses. Daryl melts into the background of the hustle and bustle of the shop, diligently drawing on an iPad.

The tattoo industry has made many changes as new technology grows, and as Lockhart says, “you change with it, or eventually, you’ll fade away.” The iPad has essentially replaced the use of lightboxes, in which they’re able to sketch the tattoo directly on the screen and even show the customer what it will look like on their bodies by photoshopping it onto their skin.

All at once, as if triggered by a silent alarm, the entire motley crew excuses themselves and back to work they go, each in their respective rooms or consulting with a potential client on the large red couch in the main lobby. “We’re like life coaches in here,” Alexis states as he jumps up from the pow-wow to suit up for his next piercing appointment. With one last laugh, Johnny mentions one of the most common questions tattoo artists get, how much will a tattoo cost? “That’s like calling up Stop & Shop and asking them how much a bag of groceries is.”

After fifteen years at Hartford County, Lockhart and his team still take pride in all their tattoos, whether it’s the meaningful portrait with detailed shading or the college kid walk-in wanting a four-leaf clover on their ankle. With plenty of projects and clients ahead of them, the whirl of tattoo machines shows no sign of ceasing.