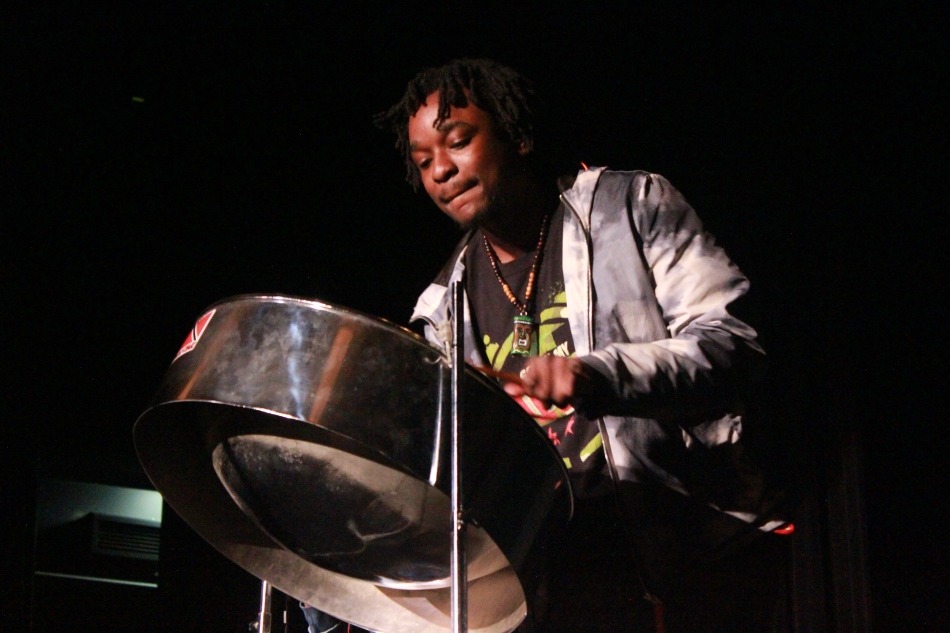 On a Thursday night in April, Central Connecticut State University students gather in the halls of Davidson waiting to get inside the Torp Theater for Night at the Apollo, the CCSU talent show. At 7:30 the doors open, and students slowly walk in to take their seats. The excitement starts to build as two DJ’s scratch and mix old school 90’s jams from Usher and Aaliyah. People chat amongst themselves as the auditorium starts to fill. The music winds down as the lights dim, the chatter stops, and the curtains rise as the host of the show, junior Ray Nasir, takes the stage to introduce the first performer.

Kelly Turner, a senior and president of Hip-Hop Nation, a student-run organization, takes the stage rapping an original song. He wears a gray shirt with black jeans, as soon as he steps on stage he starts to jump from one side to the other to interact with the audience. The crowd goes wild, cheering his name, “Kellz! Kellz!” his stage name. The beat of his song is a little slow pace, and then starts picks up to a faster flow. “I started my rapping career when I was in high school but never was serious about it until now,” he says.

Both Hip-Hop Nation and the Black Student Union worked together for two months to put this show together. “It was important for me to bring back the Apollo because there are a lot of talented people at CCSU and I wanted them to have an opportunity to showcase their talents,” Kelly says. The Apollo has been an event on campus since 2014 but has not been a consistent showcase. “Nobody really wants to take on the job because it is a lot of work, but I took that job on because it’s definitely worth the outcome seeing the crowd and people perform.”

Apollo was inspired by It’s Showtime at the Apollo, a televised series recognized singing talents from upcoming artists to amateur’s. The show ran from September 1987 to May 2008 and was just rebooted in 2018 on Fox with Steve Harvey hosting.  CCSU’s Apollo brings the television show to students, giving them a chance to show off their talents: singing, playing musical instruments, dancing, reciting poems, and playing a steelpan (a form of a drum originating in Trinidad and Tobago.)

Nehway Sahn, a junior at Central, steps on the stage as an instrumental version of “Street Lights” by Kanye West starts to play in the background.  She starts singing the lyrics, “Seems like, streetlights, glowin’ happen to be just like moments.” She hits a high note the audience jump from their seats. “YES NEHWAY!” a girl yell. “ENCORE!” another girl scream. Her performance brings the crowd to their feet.

Nehway discovered her talent when she was about seven or eight years old but didn’t start using her talent until she was eleven. Tonight, she’s nervous. “But I have performed before at CCSU at the Love Jones gig earlier this semester.”

From discovering talent on train rides to performing in basements, talent shows have created a platform for people to show off to the world. One of the trailblazing talent shows on television was Original Amateur Hour. Starting in 1948, the show aired for twenty-two years before it was cancelled in 1970. It showcased talents from across the U.S., such as singers, jugglers, tap dancers, and baton twirlers. The format was like talent shows now; performers audition for judges and if they were picked they would face off others who also made the cut. This show discovered several stars including seven-year-old Gladys Knight and the Hoboken Four with a nineteen-year-old Frank Sinatra. Although some failed to make it on the show they still had successful careers. Elvis Presley failed to make the cut when he auditioned.

From there Star Search became the next big thing. The producers changed the format of talent shows by having performers compete in vocal groups, male vocalist, female vocalists, model, spokesmodel just to name a few. Again, the show discovered many of today’s musical icons including Beyoncé, Justin Timberlake, and Christina Aguilera. The show ran for twelve seasons between 1983 and 1995.

American Idol premiered in 2002 becoming one of the most successful television shows in history. It followed the premise of judges searching for the most talented singer. The singers selected had to run against their opponents who were next in line. Not only did the judges get a say on who would advance, but the crowd also got a vote on who they thought were the best performers. The contestants have three auditions before they can make it to the semi-finals.

Back in Davidson Hall, Kelly explains the process of how the people who performed are selected for Apollo. “We reached out to a few organizations at CCSU, like the Acabellas, Pep Squad, and the African Dance team, and from there we did a lot of promotion of the event around campus. So basically, whoever wanted to sign up had a chance to perform.” For this showcase does not have practices. Their job as performers is to know when they must be on the stage and what they are going to perform.

It is getting close to ten o’clock as the last performer hits the stage. A rapper from New Haven performs two original songs. He wears a white t-shirt, black jeans, and a hat. “Left side put your hands in the air, right side put your hands in the air.” He raps swiftly using hand motion with each word he raps.  Once the last performer walks off the stage the host of the show tries to keep everyone entertained. Meanwhile, the judge’s huddle over their notes on who they think deserves to win a trophy. One of the judges walks over to the stage, handing the host, Ray Nasir a paper and he announces the winners. In first place, Global Mayhem, a dance team from Hartford, second place is given to Nehway, and in third place, Amber a singer from New Britain.

Kelly Turner speaks about the future Apollo events, “I hope that when I graduate, Black Student Union or anyone else who is willing to take over Hip-Hop Nation will take over this show and make it even better next year. We have some really talented people and I would hate to see that talent go to waste” The curtains close, as everyone gives a round of applause, the hosts of the Apollo are happy to have yet again a successful turnout.

0 comments on “Night at the Apollo: Amateur Hour on Campus | Victoria Hernandez”