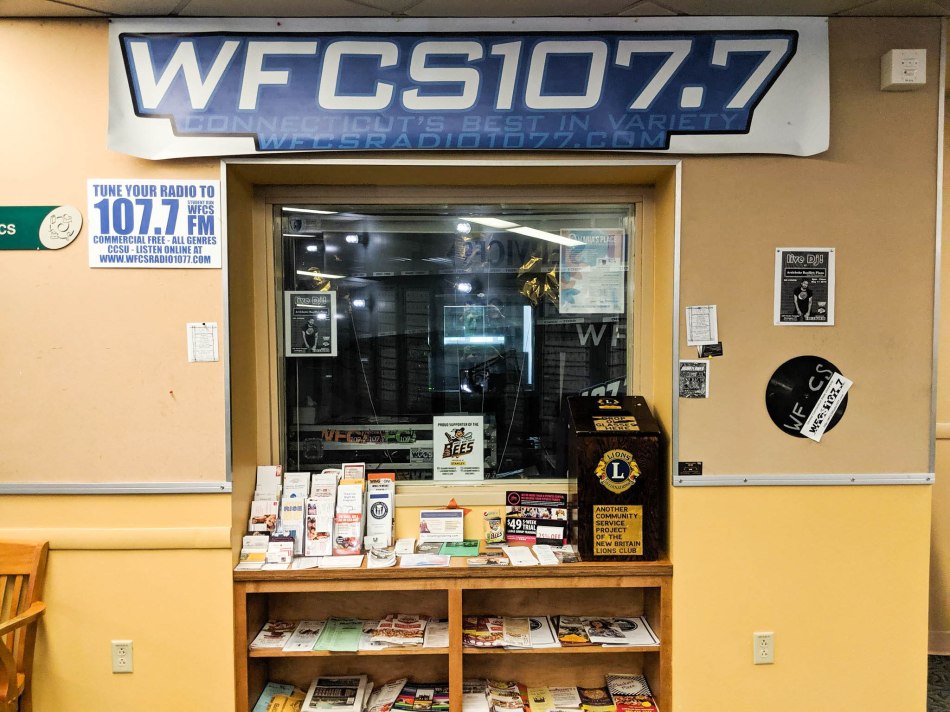 “Yes, we do! You should sign up with us! Or at least listen to it every hour of every day!” That’s my knee-jerk reaction to the innocent question always asked when I bring up that I work at the campus radio station: a surprised expression, followed by “We have a radio station?”

But to avoid the risk of scaring an innocent soul away forever, and of establishing a reputation as the radio guy who’s way too extra, I bite my tongue and cheerfully rattle off our call numbers, website, and location in the Student Center. This response is usually met with vague nods and a promise that they’ll check us out, “probably, at some point, maybe.”

Of all the campus organizations, I’m not sure how the radio flies under everyone’s collective radar. We don’t hide in the bowels of an academic building down a creaky stairwell, or at the end of an obscure and disturbingly clean hallway. Whatever tunes the current DJ is spinning echo through the Student Center from the bookstore to the Breakers game room. DJs produce their shows in a brightly lit studio behind a massive window that anyone passing by can peer through. There’s a huge sign and everything. Ever been to a campus event that has music playing? Chances are good that a volunteer from WFCS was blasting it.

One very tuned-in listener is CCSU English professor, Dr. Gilbert “Gil” Gigliotti, who’s been the faculty advisor for the radio since 1994. He remembers the days when it was all about the vinyl, before automation technology kept the music playing 24/7. “But the one constant is that it’s always been a student-run club. From playlists to the program logs, everything is students.”

There are over a 160 organizations listed on CCSU’s activities site, and most of the student-run extracurriculars are connected to a campus program. By delegating management, publicity, constitutional amendments, and nearly every other aspect of the organization’s matters to students, the organizations ultimately serve as internships of sorts. Budding scientists, politicians, hotel managers, teachers, and hopefuls for countless other professions get their feet wet in a controlled environment this way. WFCS is different, entirely independent from the various academic schools at Central and unrestricted to any full-time student who shows enough merit to become a DJ. “It’s about learning, yes radio, but also leadership, working together,” Gil emphasizes.

“I don’t remember seeing the station around, I heard about it through a friend,” said the current general manager of the station—the boss—senior Brazos “Braz” Ebner. A fan of quirky music from names you’ve never heard of like Galen Tipton and the Cromulon Twins, Brazos joined WFCS for the opportunity to spread his tastes over the airwaves. But even he barely knew about the organization’s existence before he joined.

Always ready with a smile and a kind word for his fellow station members, Brazos never thought his passion for playing the underground music he already listened to would sprout into a career opportunity. “I was playing this music and tagging the artists, and some of them never had radio play before,” he explains, grinning as he reminisces on his five years of studio experience. “I got some follows, got in touch with [the artists], said ‘Hey, if you’ve got a new album coming out I’ll play that live on my show,’ and eventually I wanted to do my own thing online. I got invited to be part of a record label that I now manage.”

Brazos manages DESKPOP, a “fun and experimental media label” that blends abstract pastel graphics with carefully arranged photo shoots of toys and found objects for album covers. He truly believes the label wouldn’t exist today without his experience at the station and the “perceived clout” of legitimizing his favorite artists’ songs by playing them loud and proud through the airwaves. And yet, he’s been pushing all year for taking WFCS out of the FM dial to go completely online.

“Radio’s on its way out,” he explains. At monthly staff meetings, Brazos has continually encouraged the DJs to consider the benefits of switching the station to an online-only format. “There are way fewer FCC restrictions, we already promote our online link more than the FM numbers, and our signal only has a five-mile radius. And that’s very expensive to expand.” He effortlessly lists off all his reasons for why the radio would be better off not being on “the radio,” a result of how many times he’s repeated himself on the subject.

Gigliotti has a respectful rebuttal with some of those reasons. “There are so many schools that have never had an actual place on the dial. The fact that we do is something we should be very slow to give up. Having that separates us from people that are only online, it makes us rarer.”

Gigliotti is ready to accept that it might just be “a generational thing” separating his opinion from Brazos’. He’s far from an old fogey swearing off technology: he faithfully advertises his Frank Sinatra show on the WFCS Facebook page every Tuesday morning, and considers other innovations, like the automation system and the ability to curate a playlist efficiently on a laptop as positive changes.

But removing radio functionality is going too far for him—considering the difficulty of regaining the 107.7 moniker once forfeited, it’s not a choice that should be taken lightly. In defense of the same “perceived clout” that won Brazos respect from the artists he played, Gil thinks the prestige of maintaining even a five-mile claim on the airwaves is worth more than might be immediately obvious. “I see more positives than negatives.”

By diverting resources away from maintaining the current FM transmitters, Brazos hopes to double down on online engagement. His priorites include a new website, better streaming, and equipment for the podcast room that we’ve been trying to get started since at least my sophomore year. Despite best efforts from the staff each year, the process of getting the secondary studio up and running for podcasting has been in red-tape Hell—first it was funny to joke about, then it was a little taboo to even mention, and now it’s just depressing to see the job incomplete. The alleged podcast room was a perfectly serviceable a quiet spot for our interview, but in terms of necessary equipment, it’s still in the minimalist state that it was last year, when Brazos helped clear it out with his predecessor.

Don’t mistake these launch stutters for incompetence by any person or the station as a whole: it comes naturally with the territory of a campus club. Students who graduate are not allowed to hold official board or music director positions, and usually have little reason to return to the station once they’re no longer taking classes at Central. Unfinished plans and discovered innovations on station management are often lost to music history by the naturally high turnover rate within the organization. But Brazos wants to change that, too.

“Being student-run is one of the strengths of the organization. It’s the goal. It’s also one of the downsides.”

“This is the best semester, internally, I’ve ever seen,” the boss states confidently, “But only because we’re addressing power and responsibilities. We’re getting rid of the vertical communication, where every decision has to be sent to me at the top and back down, and working more laterally. If you’re in a position, we put you there and you’re the most qualified to decide what needs to be done when it falls under your responsibilities. By trusting people, they will work more ethically.”

Like any organization, there have been fantastic Golden Ages as well as some serious Dark Ages throughout the station’s history. Gil muses on some particularly dark days, times where he was tempted to request that the university take over the radio station and improve it by throwing more administrative weight into it.

“But no,” he reminds himself, “That’s not what this thing’s about.” He’s confident that, in his words, the most committed and knowledgeable student members of the station will naturally rise to the top, to fill the leadership positions that require the hardest workers. “Being student-run is one of the strengths of the organization. It’s the goal. It’s also one of the downsides.”

Gil’s seen a lot of change at WFCS in his time, especially in how technology has changed the game of radio, but he also thinks that a lot has remained the same. He’s confident that if the station’s leaders and mentors focus on communication, preparation, and nurturing strong new leaders for the club with each passing of the torch, the station will stay true to its goals.

We’re certainly going to try to live up to those expectations. So, if you’re within five miles of campus or anywhere near a device with Internet access, do your ears a favor and show your support by tuning in.

WFCS plays on the 107.7 FM frequency within a five-mile radius of CCSU, and online through wfcsradio.com. Gil Gigliotti’s Sinatra show, “Frank, Gil, and Friends,” airs 8-10 A.M. on Tuesdays, and Brazos Ebner’s electronic show “Braz_OS” airs 4-6 P.M. on the same day.

Headline Photo: The view of WFCS from the outside. Not so easy to miss! Photo Credit: Clark Otis for Blue Muse Magazine.

Clark Otis is a staff writer for Blue Muse Magazine.

0 comments on ““We have a Radio Station?”: The Ups, the Downs, and the Future of CCSU’s Frequency | Clark Otis”