So the story goes, that I used to help my mom make food at home. Growing up she used to make everything from scratch, her meatballs were homemade, her apple pies were homemade, everything was homemade. She used to say to me “well with the way you like to eat, you better learn how to cook or marry somebody who knows how to cook.” Right then and there I decided I wanted to go to culinary school. After graduating from Johnson & Wales University, I moved around in the culinary field trying to find the right employment. I moved from prep cooking, to line cooking and eventually to an executive chef’s position, which stole my heart.

In this industry you always have to be prepared for a curveball. Like in the game of baseball, if you can’t hit a curveball you shouldn’t be playing the game. If you can’t hit a curveball in the food service industry, you shouldn’t be doing it. Not only do I have customers that will come at me with allergies that they use as a fad for the day or they didn’t feel the need to inform me ahead of time, but I have other issues as well. Whether it be hacking ice off some meat that I forgot to thaw or coming up with a last-minute idea to wow my customers, I always have to be prepared.

This is my briefcase, I have numerous items in here that really just depend on what I may need for the day. I actually have two toolboxes because I have too many items. I started my collection slowly by wrapping my first knife in a side towel. Then I got another one, and I eventually got five of them, so I came to find out that carrying five knives in a side towel was pretty difficult.

Knives| These are the tools I use most. I have a variety of them ranging from a small curved paring knife, to a julienning knife, a French knife, some Japanese knives and a variety of just your typical run of your mill knives. Some of them can take more abuse than others. For example, my Japanese knives are razor sharp, expensive and rather flexible so I wouldn’t use these to hack a chunk of ice. However, my French knife could be used for a variety of things such as dicing, portioning, slicing and cutting various meats. I use that one the most.  My curved paring knife is used for a detailed look that I want to incorporate to my food. For example, if I’m trying to make tornado potatoes, which are football shaped potatoes, the knife begins to turn when I use it which creates an oval shaped potato with six or seven sides.

Clam Shucker and Mini Chef| Somebody gave this clam shucker to me. It has a sharp blade that is used for cracking open the mouth of a clam. It doesn’t really work that well because you have to align the clam spot-on with the blade, but you put the clam in the little crevasse area and crack it. I like to keep it in my bag because I think it’s a neat idea and it was gifted to me. My mini chef is something else that I like to keep with me. I don’t use it very often, but I keep it because you never know when you might want to add a little special touch to your meal. I got this while I was in Holland. It’s a little candy mold but I use it with other things, like butter, I mold it and put a little lemon leaf with it to add a special touch, which ultimately keeps the customers wanting to come back for more. 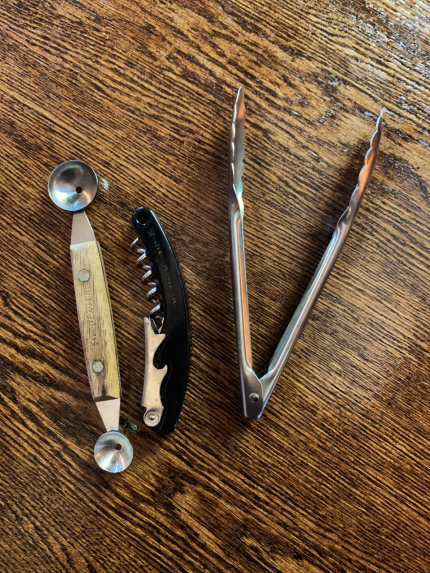 Melon Baller, Wine Opener and Little Tongs| I have got a lot of little things that I carry around, like these tongs. They’re mainly for detail-oriented things. I’ve got a melon baller which is called a Persian scoop. It’s got two different sizes for two different melon balls. I could do the small side for cantaloupe and the larger size for honey dew, that way you have two different shapes and two different colors. It goes to show the customers, that you went the extra mile to make their meal fancy or special. I’ve also got a wine opener in here because you always have to keep one with you, in your car or at work, just in case you want to have a good time. 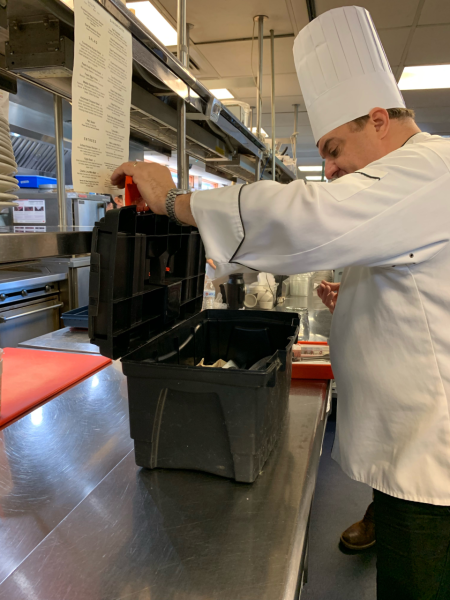 Amanda Hansen is a staff writer for Blue Muse Magazine.