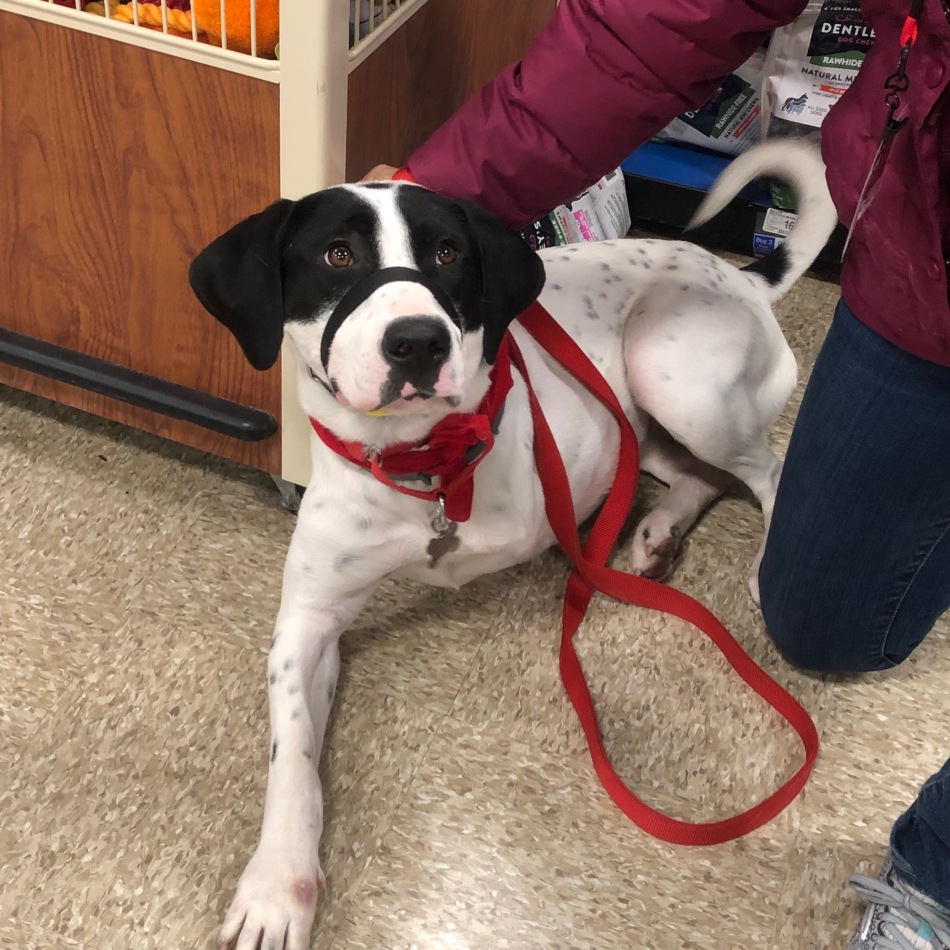 Walking into the East Hartford PetSmart on a cold November Saturday, a bone-chilling wind whips furiously across the busy parking lot, making anyone who decided against a coat regret that choice. But this isn’t a pet store selling puppies, this as an adoption event by Dog Star Rescue: a local dog adoption agency. On the sidewalk of the strip mall, potential adopters are greeted by a mass of friendly dogs so willing to give love and affection to any passersby.

Inside, the barking resonates through the relatively small space as potential dog owners crowd through the doorway and approach the red adoption board that occupies the biggest empty space in the store. Slotted on the board are pictures of the available dogs, followed by information about the age and temperament of each one.

Dog Star Magnolia, who sits close to the board, is a young hound mix. Despite only having three legs, she’s very active and loves to run. She’s also very loving toward other animals, and her foster mom shows off pictures of her cuddling with the family’s kittens.

A few aisles down are the smaller dogs, like Heavenly Hash, who is dressed up for the occasion in a little winter jacket. Despite this, she still occasionally shivers when people approach. Her card describes her as a nine-month-old possible Chihuahua mix, only about ten pounds, and a “little bit spunky and a little bit cuddly, and a whole lot of love.”

Behind the makeshift desk stands Wendy Dobrindt, one of the directors of the organization. She’s volunteered with the organization since 2016 and is a staple at most Dog Star events. Tall and blonde, dressed in a Dog Star jacket, she directs volunteers to their places as if the elevated noise level has no impact on her. Despite the mass of volunteers milling around in their identical Dog Star tees, she explains that this particular event is short-staffed. And with about forty dogs in every corner of this building, plus some outside, the number of volunteers seems less excessive. They weave through the crowds, occasionally stopping to talk to each other or to adopters, but they generally seem to be in constant motion.

Wandering the aisles, any potential adopters are greeted with dogs of all sizes and ages. Though this may seem spontaneous, as if anyone can come in, choose a dog, and leave with them that day, Dobrindt is careful to point out the screening team standing by, specially trained for this task. “We have an extensive screening process involving interviews, vet references, and personal references. Each member of the family must also meet the dog [prior to adoption],” she says. Beyond the screening team and event volunteers, there are a variety of other roles that volunteers fill at Dog Star. In fact, every member of the team is a volunteer and they’re part of a team five-hundred strong, though only about 250 are active volunteers in the state at the moment. Others work in transporting the dogs, as most of them are rescued from the south. There’s also a team dedicated to training the dogs for their future homes.

All of these people have a common love for the animals they rescue. Dog Star volunteers were quick to share the reasons that they chose to partner with Dog Star. One volunteer spoke of how his work schedule, which involved a lot of travel, made having a dog impossible. Instead, he volunteers at Dog Star events.

An older man standing outside in a worn flannel under a fleece vest has been volunteering for many years, not only at events, but as a foster. Beside him stands his current foster dog, one year old lab mix Bro. As an owner of two dogs, he recounted his foster-fail experience, in which he offered to foster a dog until an adoptive family was found. The short of it was, after only a month he decided this was the dog for him and the search for the dog’s adoptive family ended at his house.

Dog Star is also very involved in the community that it serves, partnering with local organizations from sports teams and gyms to amusement parks. One of their major annual autumn fundraising events, Bark and Brew, is a collaboration with many local businesses, including a brewery and barbecue restaurant. Music is also provided by Connecticut band Sister Funk. This is just one of the many events they hold. For last year’s holiday season, they hosted an event where pet-parents could get their dog’s photo taken with Santa, a tradition they’re continuing this year in collaboration with Raymour and Flanigan.

Speaking of the importance of community engagement, Dobrindt says, “We try to be as engaged with community as possible. We speak at schools and do various marketing campaigns. We need the entire community to support us.” Another way Dog Star builds bonds with local residents is through the recently created Dog Star For Vets program, which is designed to connect military veterans with adoptable dogs.

Walking out of the store, back into the blustering wind, one of the dog handlers smiles as the dogs jump at the legs of those exiting the building.

“Are you sure you don’t need a dog?” asks a potential owner. The woman bends to pat the dog and as it enthusiastically licks her chin, it’s enough to make anyone reconsider adopting the loveable mutt.

Siena Clymer is a staff writer for Blue Muse Magazine.