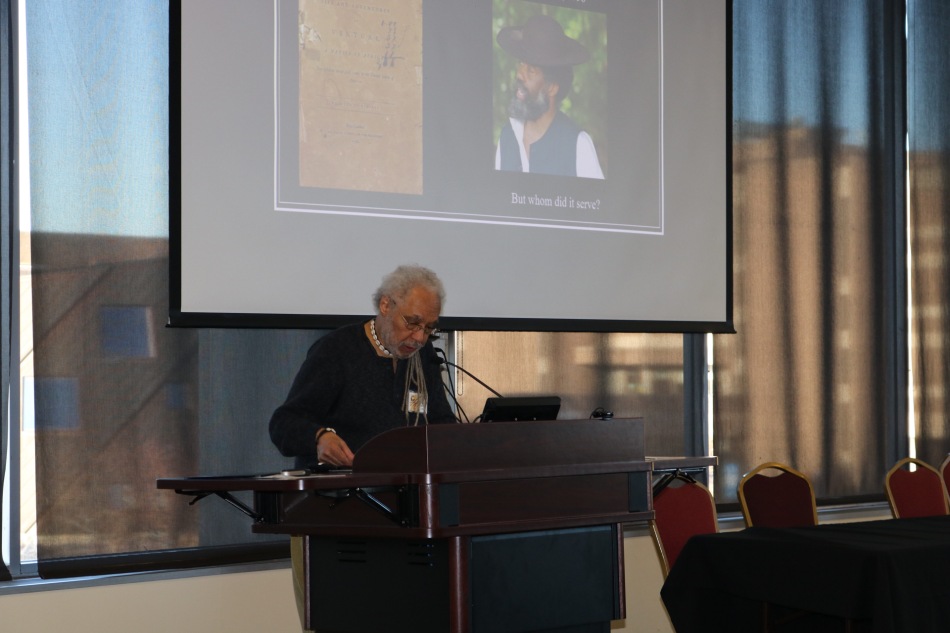 On a sunny Thursday morning in early March, Central Connecticut State University’s Constitution room buzzes with conversation as a group of CCSU students plays classic jazz. The back wall is lined with vendors proudly displaying handmade jewelry, clothing, and artwork. Faculty, students, alumni, and community members have gathered for the 26th Annual Africana Studies Conference, which is held by the Center for Africana Studies. Each year the conference aims to discuss issues that affect people of African descent that are downplayed or ignored in classrooms and media reports, such as human rights, generational trauma, and healing within the African community—but this year is a little different. This year’s topic is excavating truths and revealing the untold stories of free and captive Africans in the Northeastern US; plus, the conference is celebrating the career of Dr. Warren Perry.

Dr. Perry is a professor of Anthropology and the director of the Archaeology Laboratory at CCSU, which works closely with the Center for Africana Studies. He is retiring after twenty-six years. Dressed in tan corduroy slacks and a dark-grey, quarter-button sweater, Dr. Perry makes his way around the room, greeting old colleagues and students, and giving the occasional, heartfelt bear hug. His ice-grey dreadlocks are gathered into a ponytail that hangs down his back, showcasing his cowrie-shell choker and matching bracelet. The conference not only serves as an opportunity to celebrate Dr. Perry’s contributions, but a way to bring communities together and showcase all the amazing work done by those in the Center for Africana Studies. “It shows the significance of what we’ve built here at Central,” says Perry. “It’s powerful and it lets other students and other people see the commitment that we have to students, faculty, and community.”

“We’re digging to tell these people’s stories, because they haven’t been able to tell it themselves

Once everyone is settled into their seats, the conference’s host, Dr. Wangari Gichiru, introduces the speakers and begins a tribute to Dr. Perry. Former colleagues and students take turns presenting their archeological studies and findings, reminiscing about their memories working with Dr. Perry, thanking him for his support, and wishing him a good retirement. Dr. Perry chokes up and laughs hearing everyone’s praise. Speakers include: Dr. Michael Blakey, Dr. Jean Howson, and Dr. Ruth Mathis who had worked with Dr. Perry on the New York African Burial Ground Project.

The site contains the remains of roughly fifteen thousand Africans buried during the late 17th and 18th century. It is the nation’s earliest and largest African burial ground rediscovered in the United States. The team wanted to unearth stories of people of African descent living in New York during this time, and to better understand the ways they were able to keep their humanity during a time when it was being stripped away. From the lectern, Dr. Howson, who served as the co-associate director for Archaeology with Dr. Perry, talks about the findings from the African Burial Ground archaeological analysis, her grey bob moving subtly as she occasionally turns to look up at the slides projected on the screen behind her. Fighting tears, she shares stories from their experiences during the project. Dr. Perry’s “approach and sensitivity towards these people and their stories is a model for everyone in the field.”

Dr. Perry did more than just teach anthropology classes and conduct archeological studies during his career: he fought tirelessly to uncover the stories of those who had their stories erased, and inspired others in the process. “I feel like losing Perry has revitalized a lot of people’s determination to make something like what he made,” says Sean Clarke, a twenty-year-old CCSU student waiting to take a picture with Dr. Perry. “This event is breathing new life into the Center for Africana studies.”

Throughout his teaching career, Perry’s goal was to not only teach his students, but to learn from them as well. “It’s a dialectical approach, you teach and you learn,” he explains. “You speak and you listen, then all of us become sharper.” With his retirement, he is wary of the future of African Diaspora Archaeology at CCSU as there aren’t many African Diaspora Archaeologists in the field–which is why he encourages his students to continue the work that he has dedicated so much of his professional life to. “What I’ve tried to do,” he explains, “is train students to do it. To look through African eyes so they can Africanize their data.”

Dr. Perry also inspired students to dig deeper into their own histories and cultures. “I went to a high school where they didn’t teach this stuff. I’m trying to learn my history,” says Tamara Alexander, a twenty-year-old majoring in anthropology. “[Dr. Perry] made me understand the importance of the African Diaspora,” she says as she moves her dark brown box braids off of her shoulders.

The conference also gives students the chance to learn about the significance of their own histories and cultures, especially those who may not have been aware of their connections to the African Diaspora. Nehway Sahn, a twenty-year-old student admits that she didn’t think too much about archaeology until today. “It really snapped me out of thinking so selectively about my history as an African American woman,” she says with her hands buried in her denim overalls. “It was really eye opening to me.”

The final speaker of the evening is Dr. Perry himself. All eyes are on him as he rises from his chair and swiftly makes his way to the lectern. A uniform laugh spreads across the room as he curses technology while fiddling with the microphone and projector. Once his PowerPoint is up and running, Perry presents the stories of two men of African descent from New England whom he performed archaeological digs on: Mr. Broteer and Mr. Fortune. Showing a deep respect for the deceased and their stories, Dr. Perry wipes the tears that stream from behind his gold-rimmed glasses as he describes the different experiences that they had in life and death.

Mr. Broteer was a slave from Rhode Island who was able to purchase his freedom, as well as his family’s and other enslaved African’s freedom. He then purchased land in Haddam, Connecticut, where he worked and lived. At the request of Mr. Broteer’s descendants, Dr. Perry, accompanied by CCSU students and other archaeologists, excavated his family gravesite in hopes of retrieving DNA samples to study and assist his descendants in learning about their genealogy. Dr. Perry explains how he and his team were able to complete the task while honoring the family’s wishes and keeping them closely involved.

Mr. Fortune, on the other hand, lived in Waterbury, Connecticut, as a slave to a bonesetter. After he died, his master kept his skeleton to use as an anatomical specimen. Around 1930, the master’s family donated the skeleton to the Mattatuck Museum in Waterbury where it was displayed as a “nameless curiosity” until the NAACP fought to have the remains taken down, identified, and studied. Perry explains the archeological process and discloses that Mr. Fortune’s bones told a story of hardships and suffering. Dr. Perry then displays pictures of him at Mr. Fortunes official burial in 2013, nearly two centuries after his death.

In closing, Perry highlights the importance that African Diaspora Archaeology had on uncovering their stories and honoring both their lives, as well as the lives of their descendants. “We’re digging to tell these people’s stories, because they haven’t been able to tell it themselves,” he says. Before receiving a standing ovation, Perry encourages everyone to continue to unite descendants with the histories of their ancestors. “The truth is in the ground,” he says. The only way to uncover it is by “digging locally and thinking globally.”

Janay Wynter is a staff writer for Blue Muse Magazine