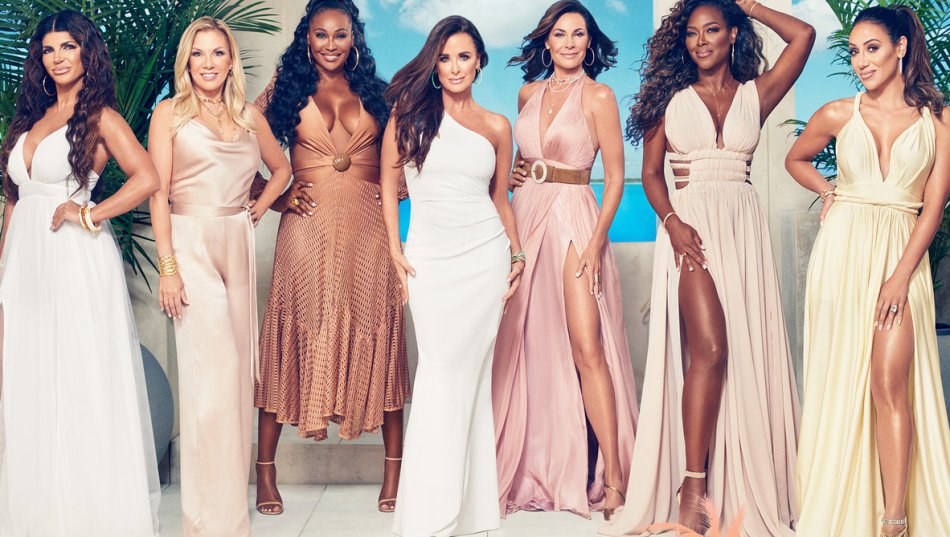 In 1973, the first American reality television series–An American Family–premiered on PBS, showing the daily lives of the Loud family in California. The PBS producers launched a new television genre that captured “real-life” through unscripted drama. Fast-forward to the 1990s when reality television shows such as MTV’s The Real World changed television forever. Most of us flip through reality television these days, skimming shows like Keeping up with the Kardashians, Big Brother, and The Bachelor/Bachelorette. Every cable channel has their own spin on the genre.

One of the most profitable franchises among the bunch is The Real Housewives. In 2006, The Real Housewives of Orange County premiered, following the lives of the fabulously wealthy ladies of Southern California, nowhere near the Loud’s neighborhood. Inspired by drama series such as Desperate Housewives, the show aims to give an inside look into the lifestyles of opulent families in their communities. Fifteen years later, the franchise has branched off, with over ten different shows and millions of viewers tuning in. The success also presents itself through million-dollar salaries.

What about the franchise attracts so many viewers? It all lies within the adrenaline-inducing drama. The shows are built off of catfights between grown women through feuds, failed marriages, and even jail sentences. The following is a ranking of the top five shows within The Real Housewives franchise by the best feuds, cast members, and storylines.

The women of Salt Lake City are the newest to join the franchise. Premiering in 2020, the show has filmed two seasons in the Mormon state. The six ladies of the cast attend lavish ski trips and extravagant birthday parties with Tongan dancers and a photo wall, and they do all of this while juggling their Mormon beliefs in between. Leading lady Jen Shah brings all the heat to the snowy city with her fiery temper. Her season one feud with cast member, and Pentecostal first lady, Mary Cosby is one of the oddest yet most heated feuds of the season. Cosby’s bizarre comment, saying Shah “smelled like a hospital,” sent wine glasses flying and voices shouting. On the other hand, fellow cast members Meredith Marks and Lisa Barlow have kept audiences engaged with their adorable friendship. Not only do the two look very similar, but their birthdays are just a day apart. However, their friendship goes down a rocky path in season two, with Barlow hurling insults at her former BFF. Clearly these women have kept fans wanting more as the show’s season two premiere saw increased ratings.

#4 – The Real Housewives of Orange County

It’s important to give credit where credit is due. That starts with the Orange County franchise. The OG Ladies of OC have paved the way for all other franchises. Some of pop culture’s most notable moments have stemmed from this show. OC alumnus Tamra Judge’s season nine reunion freak-out, shrieking “THAT’S MY OPINION!”,at thirteen-season veteran Vicki Gunvalson found its way onto T-shirts. Show alumni include fan favorites such as Heather Dubrow, the wife of E! Entertainment reality show Botched star Terry Dubrow. After a four-season hiatus, Dubrow, better known as “Fancy Pants” throughout the show, has returned to her spot amongst the ladies of Orange County. Dubrow is known for her blunt commentary, like her bold statement to cast member Alexis Bellino: “If everyone says you’re dead, it’s time to lie down.” Iconic. Other notable moments of drama include alumni Tamra Judge and Vicki Gunvalson’s season-long battle about whether Gunvalson’s boyfriend at the time, Brooks Ayers, was faking cancer or not. Cast member Shannon Beador attracted viewers for many seasons with her emotional breakdowns over her husband’s affair. Screaming matches at parties, crying, and confiding in her fellow castmates; these are a few of the many dramatic unravelings that have kept the show running for the past sixteen seasons–longer than the popular sitcom, Friends.

The Big Apple is home to the second spin-off in the franchise. These socialites certainly know how to entertain an audience. With weekend trips to the Hamptons, exclusive parties, and even behind-the-scenes on music video sets, the cast always has something on the social calendar. These events make a perfect backdrop to the weekly problems of the privileged. The ladies of New York, like the others, have had their fair share of crazy feuds. Alumnus Aviva Drescher throwing her artificial leg on the table is one of the most well-known moments from the show. Drescher’s feud with fellow cast member, Heather Thomson, originated from Drescher being accused of lying about having asthma to miss a trip to Montana. The moment is arguably one of the best endings to a season in all of Real Housewives history. Former cast member, Bethenny Frankel, is one of the most notable members from the series. Her Skinnygirl business has become a multimillion-dollar venture, hawking food to apparel. Her hilarious commentary kept her fellow castmates on their feet for eight seasons. The third season of the show saw Frankel arguing with cast member Kelly Killoren Bensimon, a moment that later turned into another popular gif from the series. The gif originated from Frankel yelling “Go to sleep! Go to sleep!” to Bensimon, who fired up her castmates while eating gummy bears and sharing her paranoia that Frankel would hurt her. As strange as these moments are, they know how to keep an audience wanting more car-crash television.

#2 – The Real Housewives of Beverly Hills

If you thought a franchise could not become more extravagant, then prepare to be surprised. With a cast boasting successful actresses, Hollywood nepotism babies, and pop singers, it’s no wonder the show’s most recent season has had many eye-catching storylines. The most recent drama stemmed from cast member Erika Girardi, or better known by her stage name, Erika Jayne. Girardi’s ex-husband, Tom Girardi (a former high-profile lawyer in the Los Angeles area), attracted lots of negative attention through his legal issues, allegedly embezzling money through his law firm. Viewers saw Girardi live her lavish lifestyle amidst the allegations, constantly traveling with her glam team.The legal situation has significantly improved the show’s viewership, giving the audience an inside perspective on Girardi’s legal woes. Other cast members like Lisa Vanderpump have grown successful beyond the show. Vanderpump’s restaurant ventures created the spin-off, Vanderpump Rules, based around her restaurant’s drama. Bravo TV truly knows how to strike when the iron is hot.

#1 – The Real Housewives of New Jersey

The most troublesome, yet entertaining franchise of them all lies with the ladies of the Garden State. Since the show’s premiere in 2009, there has been a steady flow of feuds and issues. From christening party brawls to a family retreat scuffle, this cast knows how to get physical. Cast member Teresa Giudice is the only original cast member on the show’s current season. She has supplied a majority of the show’s storylines, along with her castmate and sister-in-law, Melissa Gorga. Her legal troubles, and subsequent jail sentence, is to date one of the most captivating elements of drama in the entire series. According to the U.S. Attorney’s office, Giudice and her ex-husband, Joe Giudice, pleaded guilty to several charges, including conspiracy to commit mail wire fraud and bankruptcy fraud. Season one through seven of The Real Housewives of New Jersey saw Giudice’s entire legal woes unravel, even pausing filming while she served her fifteen-month sentence behind bars. Her heart-wrenching return home to her four daughters and husband in 2015 brought the years-long battle to an end. Other notable cast members include Margaret Josephs, founder of multimillion-dollar company, the Macbeth Collection. Her physical altercation with alumnus Danielle Staub, involving Josephs’ iconic ponytail updo being pulled is surely a moment scripted for reality television. Sentimental legal battles and raging family feuds from the ladies of New Jersey put the “real” in reality television, making the entire franchise a smash hit.

Sophie Sallusto is a Staff Writer for Blue Muse Magazine