The music started when I was four years old. My older sister picked out a snazzy outfit for me, and I was dancing and lip-syncing Britney Spears’ “Hit Me Baby” to the great amusement of my extended family. I refused to let them video tape me.

I joined the school choir at ten and picked up a flute at eleven. My best friend Megan and I made mortifying “music videos” to Jonas Brothers and Disney karaoke (thankfully, this was before most eleven-year-olds had social media). I was a choir kid through high school, singing Seasons of Love with Mr. Diamond on the piano.

Then, in my second semester at college, I turned the accompaniment off.

A cappella, or singing without instrumental accompaniment, has become popular in the last few years because of pop culture sensations Pitch Perfect and Glee, which focus on fictional school a cappella groups. However, a cappella goes back much farther than Lea Michele and Anna Kendrick.

The term “a cappella” is actually Italian for “in the manner of the chapel.” It was first used to describe the kind of singing done in certain Christian churches, in which groups of people would sing in harmony without any instruments. This practice can be traced all the way back to traditional Jewish Cantillation, a kind of religious chanting or singing that originated around 510 BC. Through the years, the a cappella tradition of singing unaccompanied shifted into the secular world. Musical theater and barbershop quartets both owe their roots to these traditions as well. A cappella as we know it today was a fully established tradition by 1911.

A cappella has since found a home on college campuses. Rensselaer Polytechnic Institute’s RPI Glee Club is thought to be one of the first college a cappella groups, and Yale’s Whiffenpoofs, established in 1909, are considered the longest-continuing a cappella group.

Central Connecticut State University boasts five student-run a cappella groups: Too Good For Instruments (TGFI) and the Acabellas are all-female; Divisi and Fermata the Blue are all-male; and Chromachord is co-ed. Twice a week you can find these groups holed up in practice rooms in the university’s music building. With spring and fall concerts for each group plus the traditional Welcome Back Concert at the start of each new school year, the A Cappella Society performs eleven concerts annually on campus. The groups also attend conferences, enter competitions, and book gigs on and off campus. 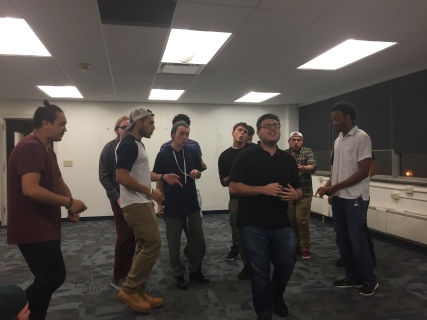 Aside from the music, these groups create strong friendships and communities, bringing together people who may never have met otherwise. Songwriters, econ majors, future music educators, and a surprising number of amateur drag queens join under one roof to, as the society says in its mission statement, “promote the sharing of a love of music with the student body.” This mindset becomes a way to live outside rehearsals. I once brought Megan, my Disney duet partner from childhood, to a game night at the home of some society members. Within twenty minutes of getting there, Megan had the Fermata boys singing one of their songs from the previous semester.

“I was nervous it was going to be difficult to make new friends at CCSU. The society allowed me to meet people really quickly,” says Jacob Carey, Chromachord’s assistant director. “They’re more than just casual acquaintances, these are close friends; we are a family.”

CCSU’s A Cappella Society wants to use their platform and their community for good. This year, a twelfth concert is being added to the schedule. In co-sponsorship with the Student Government Association (SGA), they will be hosting their first Connecticut A Cappella Benefit Concert. All proceeds from the March 26th concert will go to the Connecticut Children’s Medical Center. There will be food, t-shirts, and performances from a cappella groups from around Connecticut.

Planning and preparation for the concert has been done almost entirely by a handful of students, and the to-do list only seems to grow.

“Three months ago, I had no idea we needed a helium tank,” says Amanda Purdue, the A Cappella Society’s Vice President. “Then last night I realized, oh crap, we need a helium tank!” She shook her head. “How awkward would it have been if people were trying to walk under a balloon arc that was falling over?”

With the balloon arc tragedy averted, the month leading up to the concert has still been a scramble. “I don’t think I could figure out how many hours I’ve put into this,” says Amanda. “We should be contributing, we should be giving back.”

This Sunday, that’s just what the society will be doing. If you walk through the Student Center at noon, you will find eight a cappella groups warming up, running sound checks, and hanging streamers. After months of planning and coordination, they will be doing what they do best: making the world better through music.

1 comment on “Sharing The Music: A Cappella Gives Back | Kelly Savage”