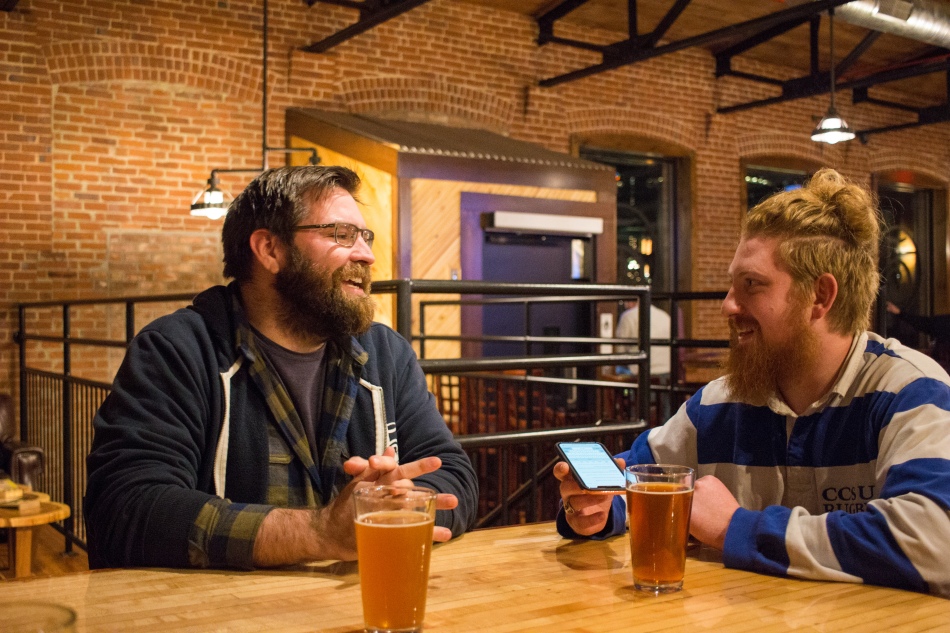 On a cold November night in downtown New Britain, Connecticut, a buzz electrifies the night from the second floor of 193 Arch Street: home of Five Churches Brewery. Home to a state university, the former hardware capital is getting serious about craft beer. Business men, college coeds, and locals belly up to cocktail tables to share drinks and catch up. Jenga blocks and other games are scattered about on the tables. The smell of fresh wood-fired pizza lofts through the air, attracting those enjoying libations toward the “Not Beer” section of the menu. One of the owners, Phil Lemontis, can often be found making his way around the barroom, chatting it up with the regulars.

The spot hasn’t always been a place for friends to get together to enjoy some craft beer. When Phil’s grandfather bought the shop in the eighties it was a coat factory. They went out of business in the mid-nineties, and the old coat factory became a storage space for the Lemontis family. Sewing machines and racks of coats were left to collect dust.

“On the other side of that wall is my Dad’s office, from there you can see five different churches. The actual steeples you can see from the window are the ones in our logo,” Phil said, sitting at a high table next to the huge window in the barroom that gives view to the New Britain skyline. He dons a large blue Five Churches hoodie and sips a freshly poured beer. When Phil had the idea to open up a brewery in the old coat factory his father, Peter Lemontis, knew he wanted to name it after the churches he could see from his office at Town and Country Transportation Company. “My dad said he wanted to call it ‘See Five’ because you could see five churches, but I thought that was eerily similar to C-4.”

They compromised on Five Churches.

The barroom is filled with all different kinds of places to enjoy a nice IPA: high tables with tall seats, low tables with short seats, bar stools, and comfortable lounge chairs. Friends sit across from each other sharing pints and memories. In the corner, alongside a large window overlooking the city, is a wood-fire stove. Fresh pizzas are constantly going from oven to table, never missing a beat. Across the way, on the opposite side of the barroom, is the bar. Mugs hang on a rope over the beer taps. Behind the taps there’s a gigantic window that allows for the patron to sneak a glance at the silver stills. Austin Japs, Head Brewer and part owner of Five Churches, can often be found at work in the backroom; crafting his next brew.

There’s a variety of different beers in their collection. On tap they have amber ales, IPAs, Double IPAs, and a rotating fruit series. Amburlance, their amber ale, is named in honor of one of the brewery’s neighbors, the New Britain EMS. It’s a light-bodied amber ale that carries a heavy flavor with a caramel wheat finish. One of their most popular beers, Steeple People, is a Double IPA that pays homage to the steeples in their skyline. The flavors of grapefruit, melon, lime, and other citruses dance across the taste buds with every sip. This DIPA, loaded with Citra hops, goes down far too easy to be 7.8 percent alcohol.

My dad wanted to call it ‘See Five’ because you could see five churches, but I thought that was eerily similar to C-4.

Although they’ve only been brewing since May 2018, they have built up quite a following. The brewery has received awards in the short period of time. On June 21, 2018, they were presented the City of New Britain’s Beautification Award by Mayor Erin E. Stewart for their dedication and commitment to help beautify the city. They were also awarded First Place by the 2018 Readers’ Choice Awards and were recently bestowed the Winged Victory Downtown Award by the Greater New Britain Chamber of Commerce.

In August, Five Churches offered a “Mug Club” membership. After paying one hundred and fifty dollars the new Mug Clubber would receive a mug, special members’ only drinks from the bar, and get limited edition Five Churches gear. There were only one-hundred mugs that Five Churches ordered so membership was offered on a first come first serve basis. Phil was surprised to find people lined up down the street and waiting in lawn chairs when he came to open the doors on the day the membership signup began.

One of the reasons they have been so successful in growing their brand is their involvement within the community. They host events in their barroom and offer their services at events throughout the city. The New Britain Museum of American Art hosts events in their galleries with either Five Churches or Alvirium, the other New Britain brewery, on tap.

The Museum and the brewery may not be the only places to enjoy a Five Churches brew. Central Connecticut State University is planning on opening a new sports facility on campus in the Fall of 2019, complete with a football field and a Five Churches beer garden. Phil told Blue Muse Magazine that he was sure that they would come up with a unique name for a beer specifically for Central’s garden.

Until the new sports complex is ready for opening you will have to make your way over to Five Churches to wet your whistle with some hoppy goodness. Head up to the second floor of 193 Arch Street and get yourself a Pew Pew IPA from the bar. Don’t forget to pair your beer with a specialty pizza, or pretzel, from the “Not Beer” section of the menu, snag a table with some Jenga, mix in some good friends and warm atmosphere, and have yourself a great time at New Britain’s newest brewery.